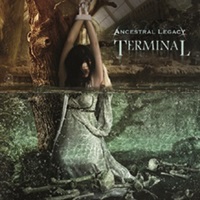 Active since 1995 and releasing a series of demos before their debut album "Of Magic Illusions" hit the market a decade later, "Terminal" is their third full-length but first exposure for this reviewer to the quintet’s style. Apparently shifting from a more symphonic black metal sound early on into something more gothic/doom oriented, the 12 tracks on this effort encompass both aspects to me of Ancestral Legacy’s wide-open outlook musically.

I get chills hearing the serene acoustic guitars against the alluring Isadora Cortina vocals for "There Is No Birth and Death", incorporating the feel of The Gathering in the early Anneke years as well as the charismatic electric strumming that has made Katatonia a worldwide favorite. The follow up "My Wretched Lord" is a 7 minute progressive-oriented extreme number in line with Opeth – guitarist Eddie Risdal providing the adequate harsh vocal contrast while he effortlessly channels the faster opening and more contemplative, atmospheric second half through remarkable patience and respect for the art of dynamic songwriting.

Another song like "Dawn of Time" features piano passages from Isadora that have a classical texture, while drummer Christopher Vigre handles the tempo changes from beginning to end as only a seasoned metal musician should – never overplaying but adding emotional nuances from serenity to aggression to Sentenced-like melancholy. Hypnotic, repetitive portions in terms of riffs, melodies, and tempos would be an Ancestral Legacy trademark – the knowledge to pick those right passages of emphasis make "Death, Silence Without Pain" and the post-metal, exotic oriented nine-minute title cut tracks that I return to incessantly.

Normally a 72 minute album is a tough proposition for me to handle front to back, beginning to end – but "Terminal" passes the muster because of the bands wide aural landscape that they display. As a result, Ancestral Legacy create a dark, gothic, and semi-progressive metal effort which will continually improve my outlook on life.