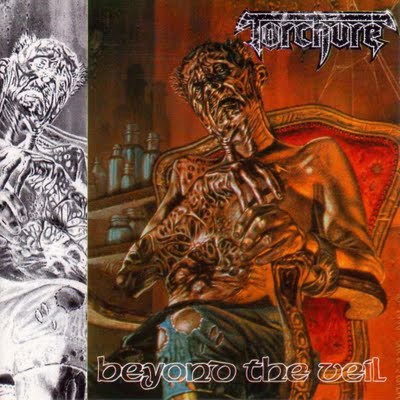 Another re-relaese of an relativly unknown death metal gem. This time it´s the German outfit Torchure and their debut from 1992 "Beyond the Veil" that is getting its fair treatment of showcasing the youth of today what they had to offer some 20 years ago.

Torchure called it a day after their second release "The Essence" in 1993 but their keyboard laden formula (ala Nocturnus) should get its praise.

"Beyond the Veil" is a fairly primitive death metal recording with simple structures based on one or two crushing riffs per song that leaeds into a bridge to do it all again.

The drums are very distinctive in this re-release and really drives the music forwared with not to advanced beats but intricate enough that they don´t sound monotone or repetetive during the 48 minutes the albums spins.

The vocal by mr Matzak also shoud be mentioned because here Torchure really delivers something unique for their time. The deep and dark growls are easy to dechiper and reminds sometimes to what the dark thrash bands of the time could sond like (ex Sodom).