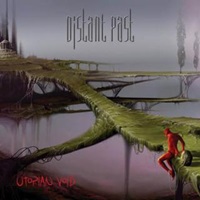 Traditional metal with flashes of thrash and power metal from the Swiss band Distant Past, "Utopian Void" appears to be a mixed bag affair to these ears. Megadeth comes to mind with the lead break choices and attacking riff motions for "On the Edge", while Iron Maiden and other NWOBHM acts come to mind with opener "A Day of Darkness" or the longer charged up "The Hell of Verdun". Many songs contain narrative sound bites to offer contrast to the arrangements- but for my money the struggle for repeated airing lies at the pipes of vocalist Jvo ‘Jay Jay’ Julmy.

He has one of those voices that you can love or leave: it’s mysterious, sultry, but not all that convincing when he really attempts to soar in higher ranges. "Signs of the End" has a little Blue Oyster Cult in terms of the talking/ psychedelic 70’s nature that suits his style well, but the half-ballad, half-anthem "Helpless" contains too many cringe worthy verse passages. It’s such a shame as I think the rhythm section of bassist Adriano Troiano and drummer Jan ‘The Onion’ Zwiebel are as rock solid as you expect in the metal realm, and guitarists Alain Curty and Christof Schafer play with intuition and taste, not merely throwing down speedy licks without forethought to the song at hand.

There is a cult-following for this type of traditional metal: meat and potatoes in terms of the chord/ riff selections and natural transitions for dynamic contrast. "Utopian Void" as a result would be fine for the most part as an instrumental album- so I suggest the band really evaluate what they want to accomplish on the vocal front to progress further and make more of a long-term impact.