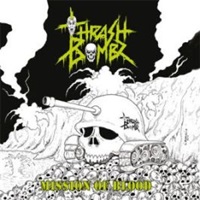 Active since 2007, Italian quintet Thrash Bombz doesn’t really leave much to the imagination regarding what style of metal they play, now do they? Their debut album "Mission of Blood" has a lot of that stair step, heads down riffing and chant vocals that could crossover a lot of Testament and Anthrax with a touch of S.O.D. – even on the 5:50 "Thrash Bombz" vocalist Leonardo ‘Thrash Maniac’ Botta is up to the task in rambling off the words in unison with the speedy chord progressions and changes.

"Human Obliteration" contains a couple of sinister twin harmonies done with simplistic taste from Salvatore ‘Skizzo’ Li Causi and Giuseppe ‘UR’ Peri, and the piles of aggressive, pounding thrash riffs never stop- although you do feel a little sameness in the drum department by the time you get to track eight "Fear of the Light" – and this is only a 12 song, 40 minute album. I wish they would pursue more of the sinister edge within "Necrosis" that made early Razor so endearing and I would find this much more of a priority to sink my teeth into again and again.

I’ll chalk up "Mission of Blood" with casual appeal and a possible band to watch out for. As they gain more comfort shedding their influences (and their silly nicknames), I think Thrash Bombz could have long lasting appeal for those who like punishing old school thrash.