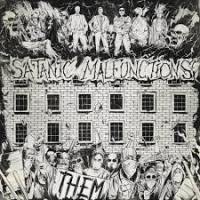 After an absence of about 22 years Yorkshire 3 piece Satanic Malfunctions have returned with a full length album that takes the listener straight back to late 80’s/early 90’s hardcore. By that I mean real ‘hardcore’. Fast, angry, crusty and with a political and social conscience – quite dissimilar and infinitely better than the kind of slowed-down macho posturing that is currently called hardcore.

There is a lot to be said for the authentic approach taken here. "Them" could quite easily have been released in 1991, as far as sound and production goes. That is a good thing for those seeking a trip into the past. On the other hand the guitar sound is pretty lame and the drums are a bit tinny in places, so might not appeal to the Pro-tools weaned kids of 2013.

The songs are good, but nothing remarkable, so ultimately, much of the appeal of "Them" lies in the approach taken and the fact that it relives the UK scene of yore. Now all we need to do is get Heresy back into the studio…