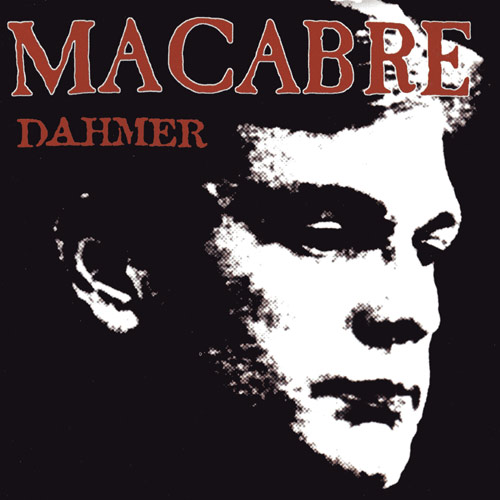 Macabre (US) have coined the label "Murder Metal" on their music, mostly because of their lyrical content that (almost) evolves around various mass murderes.

Macabre started out back in 1984 but have only released five full-lengths since their debut "Gloom". Their music can be described as a hybrid between grindcore, thrash and death metal -> Murer metal.

They have managened to stay relatively unknown to the general metal scene except to the underground all this years and that may be a combination of both their sometimes "unserious" music and their lyrical content.

In 2000 Macabre released their third obus aptly called "Dahmer" and you can take a guess about who the concept album is about.

The re-release contains all the 26 songs on the original and the sound is great. Not to overproduced but right in the middle of late 90´s primitiveness and early 2000´s shined for maximum output.

Macabre as mentioned plays an obscure form of metal with a lot of black humour and this can be heard on "Dahmer". All from hard chugging to nursery rhymes is included and it can take some of the musical aspect away with so much diversity.

The varying tone of the vocal works well and fits the overall sound very well. The vocal may actually be one of the strongest aspects of Macabre.

Personally I like Macabre when they keep their music on the serious note and even though some of the less serious parts can be enjoyable they tend to annoy me more in the long run because they ruin some of the atmosphere/vibe that get´s going.

Overall "Dahmer" as both a good and interessting piece of extreme metal and if you have not picked up this semi "classical" yet, now is the chance to give Macabre a shot.