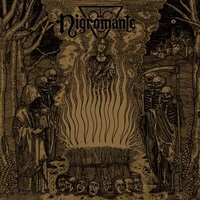 I admire persistence in the metal scene, and this Spanish heavy metal act Nigromante has a ton of it. To finally see the release of a debut album "Black Magic Night" 11 years after forming could be considered a true sign of commitment (or insanity), depending on the final product. For this duo of musicians – Serra handles the drums while Choco is the vocalist, guitarist and bassist- the 9 tracks on this record revel in the old school: 70’s era Judas Priest, "Hard ‘n Heavy" era Anvil, and the early pioneers who lived for the power chord ringing out ears nation to nation.

With killer song titles like "Saturnalia of Blood" and "Summoning Spell", musically things are quite simple but effective in the 3-4 chord constructs. Vocally though, the heavily accented English coupled with a Grave Digger gravel equals a sound that can irritate more than please- which for Nigromante is not a good thing this many years into writing material.

Even if this were released 30 years ago, I think Nigromante would have struggled to gain any sort of popularity because a lot of their riffs are direct descendants of known acts: "Saturnalia of Blood" knick a lot from "Seek and Destroy", "Heavy Metal Age" may be a sped up version of "Symptom of the Universe", and "False Idol" has a ton of Mercyful Fate evilness all over it. If I want a tribute to the old school, I’d break out Powergod or Roxxcalibur, not this Spanish act who appear slightly out of breath in terms of developing their own sound.

"Black Magic Night" is only for the mightiest to handle.