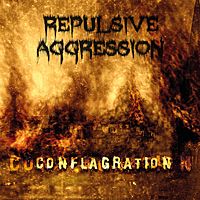 I couldn’t find much info about Norwegian act Repulsive Aggression, but I believe I’m correct in saying that ‘Conflagration’ is their first full-length release. It contains ten tracks of tightly focussed death metal with thrash influences littered throughout. Some members of the band were involved in black metal acts prior to recording this album last March and this has resulted in an icy edge to some of the tracks. Coupled with the brutality of some parts, it works well.

Repulsive Aggression’s approach involves plenty of bottom end rhythms that bubble away in the darkness, creating an excellent groove, layered with some great drumming that features lots of toms, intelligent double bass (ie. used cleverly rather than just splattered throughout as we see too often) and excellent snare work. The vocals are a bit higher than the usual DM gravel voice and slightly distorted, so they really work well and make a nice change from the usual fare. The guitars mostly contribute to rhythm with a dark and cutting feel, although the leads are incisive too. There is a good balance of fast/mid/slow material and all of it is played with sufficient energy and force that it doesn’t drag or allow the listener to switch off.

It is difficult to place whether this is more influenced by US or Euro death metal, and that is a good thing. ‘Conflagration’ manages to sound original while not actually sounding substantially different from the rest of the field, if that makes any sense! The death metal atmosphere isn’t super thick. It never made me feel like I was trying to escape from a crypt of festering zombies, but I think that is because the focus was on creating a groove that would carry the listener along and making each song as solid as it could be and Repulsive Aggression have been successful on both counts.

This is easily one of the better DM releases of the year and introduces a band I’ll be keeping my eye on in the future.