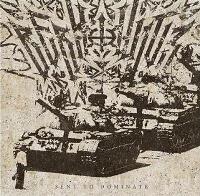 Berkowitz is the brainchild of multi-instrumentalist Unas and this is his second full-length release in only two years. From the start it is obvious that this is a pretty impressive piece of work. ‘Sent to Dominate’ is modern black metal with a balanced production, so it doesn’t sound too bottom or top heavy. In terms of the music, expect plenty of blasting, but also some very effective rhythmic sections and lead guitar. Elements of thrash, punk and even the odd glimpse of melody sneak in here and there, meaning there is plenty of variety and the songs feel more like a musical exploration of the territory rather than a straight rush to the finish line. It also means that this is a very accessible album, without oversimplifying things or losing any of its power in the process. Plus, Unas isn’t afraid to rock out when the need arises.

This is the kind of thing that makes me happy to be a reviewer – finding gems like this that others might miss and bringing them to people’s attention. ‘Sent to Dominate’ is a classy and accomplished album that is better than the majority of the major ‘big band’ BM releases of 2012. It’s not too late to send a letter to Santa and add this to your list…