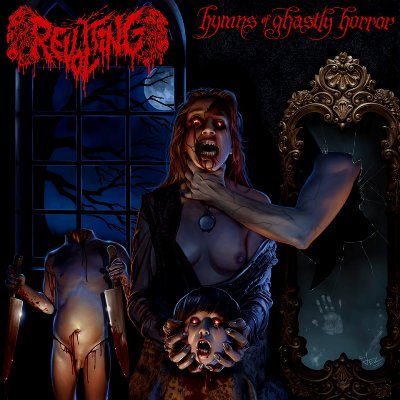 You actually can’t count all the bands/projects Rogga Johansson is a part of. Besides death metal trio Revolting he also participates in Ripspreader, Pagaziner, Demiurg, Bone Gnawer and Putrevore just to name the most known.
Personally I find Paganizer and Demiurg to be be the two most interesting of the lot but this Revolting release took me by a little surprise.
"Hymns of Ghastly Horror" is Revolting’s fourth album and Rogga handles both the vocal and guitar on this one so those that know him from some of his other bands know what to expect. Guttural vocal that is easy to listen to and not becomes annoying in the long run. His guitar work is ok on this one, not too technical and not to creative either but I don’t think that is the subject matter here. Revolting is all about creating well tried and true death metal and here they succeed on both.
The album is not full of surprises but there are some and even on the third listening run in a row I discover some now elements and still not got bored so that must be positive. The arrangements are good but with some repetitive parts that is covered up in either a solo or shift in tempo. The production is good and not to intensive.
Rogga is a death metal wizard with seemingly an endless creative mind for this extreme form of music and Revolting’s "Hymns of Ghastly Horror" adds fine to his already mighty back catalog.