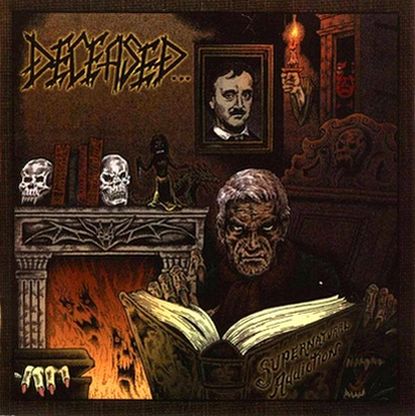 Death thrashers Deceased with King Fowley in front has managed to stay the course since their inception back in 1984.
Their thrash (early), thrash/death (later) has found an cult following and their debut "Luck of the Corpse" has an unique space in many head bangers hearts. Personally I have never really figured out Deceased. I remember liking their 2005 relaease, "As the Weird Travel on" but their earlier albums never made an impression on me.
Last years "Surreal Overdose" I think took many by surprise with some really strong songwriting. Vocalist/drummer Fowley still have what it takes to thrash it out and he proves this well on this re-release of 2000’s "Supernatural Addiction". Deceased’s music is more thrash than death but some of their arrangements is purely in the death metal formula and I think those parts are what Deceased does best. When they go all in on both tempo and complexity they sound much better than when they do a more simple staccato form of thrash (example Elly’s Dementia).
The production is good and all instruments are clear and well present in the mix. Fowley’s voice is fitting well with the material but as mentioned above, I really dig the more aggressive parts over the "plain" and common thrash arrangements.
His lyrics are on the other hand quite amusing and its strongly adviced to have the lyric sheet in hand as you listen.

All over is Deceased’s fourth studio album above average good but not something that is going to be played weekly.