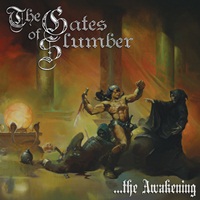 Originally this debut album came out in 2004 on Belgian label Final Chapter Records. Given the recent upswing in popularity within the traditional doom/ heavy metal community for this Indiana act- especially over the course of their last three studio albums "Conqueror", "Hymns of Blood and Thunder" and last year’s "The Wretch"- the band (and fans) I’m sure felt it necessary to re-release this 8 song outing and tack on a 9 minute plus bonus cut for "The Cloaked Figure".

"…The Awakening" is an effort from a trio of musicians hungry for respect in a genre that doesn’t get enough credit for its place in the metal community. Doom will never be the golden child, destined to always appeal to those who feel the lethargy and pain as a sign of relative comfort. Black Sabbath, Saint Vitus, and Pentagram rule the creative flow of these songs- Karl Simon the electric riff maestro and holder of the melancholy voice, Jason McCash the four string bass demon and Chuck Brown responsible for pounding the snare and cymbals at a sleeping pulse rate.

Keeping the production primitive adds older allure- the wah wah bass opening to "The Jury" intoxicating and mysterious all the same before Karl’s riff groove kicks your body into a lumbering, protracted head whipping stance. The Gates Of Slumber live in a classic doom world- there’s no desire to hit the stoner or funereal community here with metal at the forefront of their musical philosophy. If Karl feels the need to extend a solo break or the band wishes to dig deeper into the main riff for jam’s sake- so be it.

Music that touches the soul needs to have the combination of care and truth. You’ll feel it in "…The Awakening"- and hopefully seek out these 5 albums to realize what a glorious doom act with traditional leanings can achieve.