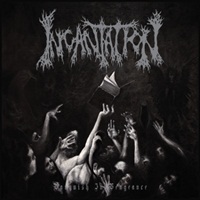 To be honest, I had never heard Incantation before ‘Vanquish in Vengeance’ made it into my inbox. Yes, I am a death metal fan, but as a reviewer, I am acutely aware of how oversubscribed the genre has become and I feared opening the door to a band who might well prove to be just another voice with nothing new to offer. Not the most open-minded place for a reviewer to be coming from perhaps. But there you have it. And, in the final analysis, after a dozen listens, quality will shine through… won’t it?
I’m sorry to report from the start that my worst fears have been realised on this occasion. Obviously, I’m not in a position to compare ‘Vanquish in Vengeance’ with this band’s eight previous full-length studio offerings, but I can tell you what is on offer here. I suppose the best thing about Incantation is that they aren’t afraid to slow things down and the heavy, doomy guitars and ominous bass definitely succeed in creating a mood. There is a good mix of material here – winding and circuitous slow riffs, mid-paced chugging with plenty of double bass and enough fast sections to round out the offering.
Beyond that, though, we have the major problem that the songs don’t grab the listener well enough to make this a first class release. Yes, there are moments, but they disappear as quickly as they arise and we are back to the forgettable morass below. Even though the atmosphere of slow creeping doom has succeeded, the songs don’t have the hooks to get them fully off the ground.
John McEntee’s work with his wife Jill in the resurrected Funerus offers much the same fare but is a much more compelling and enjoyable listen. As for ‘Vanquish in Vengeance’, I’ll have to pass.