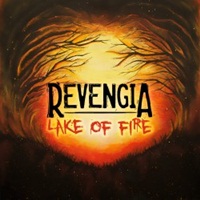 The third album from Sweden’s Revengia "Lake Of Fire" appears five years after their last studio offering- which should give them plenty of time to offer a killer product. Intertwining traditional power drumming and riffing with a modern vocal and groove edge, songs like "The Day I Die" and "Bloodline" have that Morgana Lefay meets current Annihilator and Metallica vibe musically- along with occasional forays into latter day Sacred Reich or Pantera for grooves. The drummer Conny Pettersson loves to use his ride cymbal, especially on the semi-blast beat sections of "His Will" and "Termination (By the Hand of Creation)"

The problem is, the vocals of Tobby Bernstrom are a growl/ barking montage with occasional use of whiny melodic parts that render every song interchangeable- and the over abuse of vocal effects, delays and echo mechanisms only fuel the desire to erase Revengia from my memory bank. With thousands of bands keeping things in house as far as studio work, you often wish they would work harder on their output. "Lake of Fire" sits in that mediocre pile, probably an album most will forget minutes after the last notes fly out of your speakers.

I’ve tried to engage with this 11 song album morning, afternoon, and night- each time struggling to make it all the way through in one sitting. It’s not that technical or progressive oriented, so that’s not a good sign for meeting standards of metal acceptability. "Lake Of Fire" needs to be set out to pasture, and hopefully Revengia returns with something stronger for their fourth full length release.