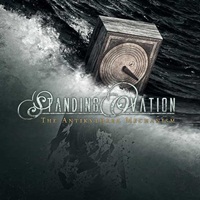 Beginning in 2006, the progressive metal sextet Standing Ovation spent a number of years getting their musical style in place- recording a 5 song demo in 2011 prior to this debut album "The Antikythera Mechanism". Ethereal, left field musical thoughts spring forth amongst these 9 songs – including a breath taking three part title cut that takes up the final 20 minutes of the record.

The ominous acoustic intro "Scatter" has a point / counterpoint set up, with one guitarist plucking a single note while the second guitarist presents beautiful chord progressions which finally merge into this heavier opening vocal cut "Escapade". The bass play from Panu Nykanen in this song rivals Steve Harris meets Geddy Lee, as the rhythmic word melodies from Jouni Partanen sit outside the typical progressive realm, very dramatic and theatrical in a Pain Of Salvation meets Diablo Swing Orchestra way. The follow up "Travesty" has a serene, almost folk meets nursery rhyme arrangement to it, the acoustic guitars melding nicely against the piano parts from Petri Eskola before the second half of the song has the emotional upswing with a System Of A Down-like angry crescendo.

Imagine this experience for the whole of the album’s 55 minute duration. Straightforward is not in Standing Ovation’s musical vocabulary- if one musician seems to be thinking in that manner, the drummer needs to go off on a tempo tangent- or the syncopation opportunity brings a technical flurry that blows your ears away. Even when the keyboards and double bass drumming go into power metal overtones for "I Have Superhuman Powers", the alternative vocal and bass approach give the Finnish group their own flavor- the respect and creative chemistry rarely this developed on a debut effort (but obviously a sign of their years together).