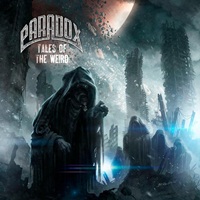 Back in the 1980’s when thrash and power metal reigned the underground, somehow my ears sought out the balance between crunchy riffs and this jackhammer precision of execution- along with the underlying sense of melody be it vocally or musically. When others wanted to see how much faster or technically out there the movements could go- I gravitated to the sounds of Artillery, Heathen, and Znowhite (which morphed into Cyclone Temple). And due to the sheer volume of albums versus a limited budget as a teenager, other acts in the genre with similar philosophies had to wait until I could afford to catch up- such as Germany’s Paradox.

"Tales of the Weird" is the sixth and latest album from the four-piece, coming off the fine "Riot Squad" outing in 2009. Much of the double barrel riff action from vocalist Charly Steinhauer and fellow guitarist Christian Munzner has this intense galloping nature- some would say very Annihilator-like in "Brutalized" or "Escalation" – along with a hint of long lost acts such as Wargasm or Cyclone Temple. Bassist Olly Keller and drummer Daniel Buld keep up to the power and speed thrash challenge at hand- intertwining with the faster sections and also knowing when to keep the proceedings simplified for effective impact in the mid tempo parts. Charly isn’t afraid to inject a little bit of a swing shuffle aspect to the instrumental section of the 7 minute plus "Brainwashed", but for me the pick to click this holiday season is the opening 9:19 title cut. The opening with thunderstorms, animal howls, and an inviting acoustic guitar presence sets the scene for a series of blitzkrieg harmony riff segments against the instantly accessible heads down thrash arrangement- this number should cause severe neck pain.

Melodic, memorable, and with killer musicianship to boot, "Tales of the Weird" is an album the newer generation of thrash should study- Paradox keep raising the bar on the movement and it’s very welcome indeed.