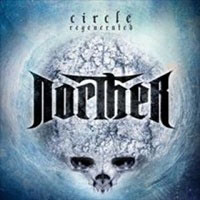 Once a band establishes their sound, the next entity to unravel will be the personality and business ethics facing a set of musicians. For Finnish melodic death metal act Norther, a major lineup shift takes place as guitarist/vocalist Petri Lindroos no longer will be dividing his time between folk metal band Ensiferum (where he has been the front man since 2004) and this group – leaving two slots open. Rather than stay a five piece, Norther expands to a sextet with Naildown guitarist Daniel Freyburg and former Imperanon singer Aleksi Sihvonen making their virgin recordings on “Circle Regenerated” – the band’s sixth official album.

Considered by numerous critics and fans the world over as a step-sibling of the Children Of Bodom school of savagery, over the last two studio records I believe Norther have set their sights higher in attaining their own following with an emphasis on varying the tempos as well as the guitar/ keyboard riff parts so it’s not all off to the neo-classical like racetrack. Sure the opening twosome “Through It All” and “The Hate I Bear” contain the caustic vocals and precision riffing you want from a melodic death metal band, but the clean choruses on the latter see Norther bridging into Soilwork / Mercenary territory.

Where Norther shine on this album is their propensity to assault the listener with a bounce heavy rhythmic sense that you can’t help but be swept into – which drummer Heikki Saari deserves a load of credit for in terms of his accents and versatile double bass/ fill runs on “Believe” and “Truth“ most notably. And there’s something about the 70’s style opening keyboard run and outer world guitar parts within “Break Myself Away” that should make this an instant set hit with all Norther followers – it’s the yin and yang melodic death masterpiece that makes me want to hit repeat again and again.

So no fears here – Norther aren’t veering into commercial pastures as much as still roaring the high quality Scandinavian pummel effect we’ve come to love for quite a while. “Circle Regenerated” establishes Norther as the real deal and no longer lurking in the shadows of others.

NECRODEATH – The Age Of Fear