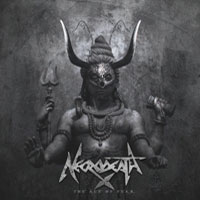 NECRODEATH – The Age Of Fear

Having no previous experience with Necrodeath, it was not until the eleventh track that I realized this was a compilation album. That really says it all about their self repeating ways. The Italian band released their debut in the late 80’s and the thrash metal they perform is in the vein of Exodus and Legion of the Damned.

When first listening to the album, I thought it was pretty decent, but still like the little brother of Legion of the Damned. Realizing that the music I was listening to predates that of LOTD gives Necrodeath some credence. Still, this being a compilation, it is somewhat off-putting that the collected material doesn’t compare to any of LOTD’s albums. The singing is okay, but the melodic content is forgettable and the riffing is uninspired and repetitive.

As for the production, it is quite telling that I mistook this to be another studio album. Talk about sticking to the formula. Apart from the 80’s tracks, the material on this compilation shows a band which sticks to their guns, reloading them with standardized production, typified riffs and melodies. It sounds pretty tough at times, and had the content been more memorable this band could have been fighting head to head with Legion of the Damned for the current thrash metal throne. Unfortunately, Necrodeath doesn’t quite make it, and remains a peripheral band in my book.