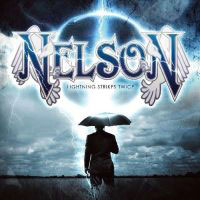 It’s more than 10 years since the last time Gunnar and Matthew Nelson released a hard rock album, and with the exeption of "Imaginator" (1996), they’ve never been close to top their debut, "After the Rain" (1990). And then in 2010 they release their best album EVER! "Lightning Strikes Twice" is a dream come true to every fan of melodic hard rock and AOR, and its perfect from beginning to the end. The best song – "How Can I Miss You", but the whole record is amazing. Highly recommended!

SONS OF LIBERTY
"Brush-Fires of the Mind"

Rebel Heart Rock Festival, John Dee May 15. 2010. Great performance from Norway’s finest metal act, Highland Glory + the one and only performance of Metal Pirates: A Tribute To Running Wild. Truly a night to remember!

The amazing comeback of Nelson. I was hoping for a decent rock album, but I never dreamed of a masterpiece like "Lightning Strikes Twice". Comeback of the year!

SODOM
"In War and Pieces"

Amazing work from Eliran Kantor. A classic metal artwork, and I can just sit and stare at the cover while listening to the album.

Lynyrd Skynyrd. Simply the best band that ever existed, and even after numerous deaths and tragedies, they’re still as strong as ever. Both live and on albums, Skynyrd have always delivered the goods better than most bands, and "Free Bird" is the ultimate anthem and hymn, and the best piece of music ever written. I’ll love Skynyrd ’til the day I die!

Whitesnake! They exceeded all expectations with "Good To Be Bad" in 2008, and there ain’t no doubt in my heart that they will deliver one of the best, if not THE best album in 2011. David Coverdale is a God!