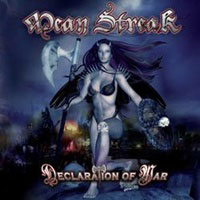 One of my highlights of 2009 would be taking in "Metal Slave", the debut album from Sweden’s Mean Streak. A great montage of classic Iron Maiden, Accept, Judas Priest and Dio, my hopes are soaring for the standards to continue with their latest effort "Declaration Of War". Breaking in their latest acquisitions on the road, guitarists Patrik Gardberg and David Andersson finally get the chance to display their creativity in solid studio form – and these 11 songs prove Mean Streak aren’t going to belong in the newcomer, opening act status for very long.

“Brothers Til The End” contains a stirring anthem-like drum tempo from Jonas Kallsback and a chorus worthy of Nocturnal Rites circa The Sacred Tailsman. “In For The Kill” once again pays homage to Accept, this time with a main riff not that dissimilar to “Up To The Limit” from Metal Heart. Singer Andy La Guerin isn’t content to push his melodies into normal ranges – he unleashes some wild screams on the epic closer “The Oblation”.

Overall the five-piece appear much more comfortable shifting velocity from song to song and also keeping the spirit of traditional and power metal in tact. The title track opens with a subtle battle sound byte before Jonas pummels his double bass and snare in fine Scott Travis/ Jorg Michael-like fashion. There isn’t a song out of the bunch that I felt the need to fast forward through – be it twin leads, thundering bass, dynamic drumming and consistent hooks through the riffs or melodies, it all conveys metal par excellence, classic and confident. My favorites in the moment include the Dio-esque “Crimson Sky” and the pulsating “History Of Lies” with its crisscross riff attack.

I foresee a steady climb in attention, audience participation and notoriety for Mean Streak as this second album proves they are in this business of music for the long haul. Hopefully the third album will make them true headliners from continent to continent.

DEATH – The Sound of Perseverance (Reissue)