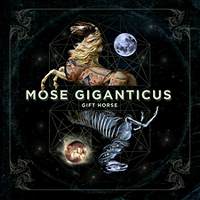 Mose Giganticus creates a delicate mixture of synth, rock and metal. After the slow and enduring opening notes of "Last Resort", a song that grows on you the more you listen to it, the album finds an early highlight in "The Left Path". The song has a strong opening riff that follows the song through to the end. The way of hammering out the lyrics in the opening bit of the song is sure to get people aggressive and quite involved.

One thing that becomes more and more apparent as the songs keep coming is that Mose Giganticus is frightfully talented at mixing synth elements with metal themes in a manner that brings great honour on both genres. The instrumental bits are sometimes as close to perfect as humanly possible. This also makes the music catchy all the while being quite heavy. "Demon Tusk" is probably the best evidence to support this claim.

All in all the fourth album in the Mose Giganticus saga brings no shame on the previous albums. While being a good album after some closely analyzed plays through any CD player it lacks that ability to engage anyone at first glance. Apart from some major highlights like "Demon Tusk", "The Seventh Seal" and "The Left Path"  the listener really needs to concentrate on the skill that is portrayed by Mose Giganticus and to fully discover just how good this album really is!