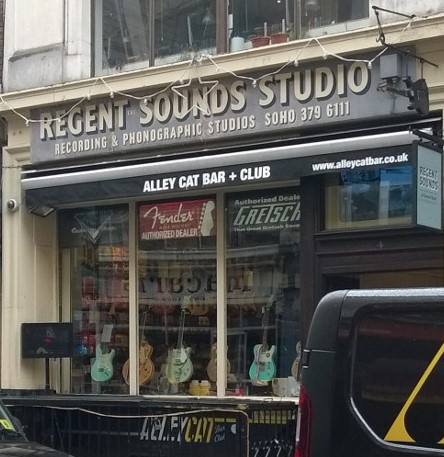 That Regent Sounds Studio in 4 Denmark Street, also known as the Tin Pan Alley, which is located in London’s West End, occupies a special place in British rock music history is neither in doubt nor in question. Countless renowned artists and celebrated groups laid down their timeless grooves and melodies in this hallowed recording studio facility, and its cultural significance and contribution to the music scene in general cannot be overstated. Whenever I find myself in the vibrant Soho district, I always try to make sure that I have a few minutes all to myself where I can simply stand and contemplate the small yet vital shrine of the sound of the sixties and seventies and take in all the history that surrounds the place. Nowadays, the building houses a cool-looking guitar shop, so at least there is a link of sorts to what it once was, and the shadow of old luckily still lingers there. On top of that, the sign that proudly reads REGENT SOUNDS STUDIO above the store is intact and immediately catches the eye as you enter the street from Charing Cross Road.

The Rolling Stones recorded their eponymous debut album (1964) and a chunk of their sophomore LP (1965) in the small and cramped 4-track studio while such notable acts (and precursors to hard rock and heavy metal) as The Kinks and Jimi Hendrix rehearsed and cut a few demos in this very spot. The innovative prog rockers Genesis recorded their debut album From Genesis to Revelation here as well. As author Daryl Easlea says in Without Frontiers: The Life & Music of Peter Gabriel, “In the summer of 1968, [Jonathan] King took the band into Regent Sound Studio B in London’s Denmark Street (the fabled music industry Tin Pan Alley) for 10 days during their school holidays, to work on an album.”

With respect to the legendary The Kinks, perhaps the most famous and familiar tune they ever conceived is ‘You Really Got Me’, which is arguably also one of the very first proto-heavy metal compositions to see the light of day. As Nick Hasted states in You really Got Me: The Story of the Kinks, “The bare riff which announced ‘You Really Got Me’ was another jump forward. It was the hardest British rock record yet, written by Ray: prototype punk, primitive metal” (24). As Hasted also mentions, “The Kinks demoed ‘You Really Got Me’ on March 18 at Regent Sound Studio” (21). Actually, the Davies brothers had already done some recording at the studio prior to this when they were with The Boll-Weevils, which was essentially a pre-Kinks outfit: “On October 19, 1963, The Boll-Weevils recorded a demo with session drummer Bobby Graham at Regent Sound studio in Denmark Street” (Hasted, 14).

The Cambridge group known as Jokers Wild, which included a certain David Gilmour (Pink Floyd) in its ranks, recorded a number of songs here in 1965 and 1966. You also had Tom Jones, Elton John, and David Bowie and The Lower Third do different bits and pieces of work at the studio. For the Queen enthusiasts out there, it is also worth mentioning that Brian May ventured into the revered studio in 1967 as a member of The Left-Handed Marriage to lay down some tracks: “Brian’s final recordings with The Left-Handed Marriage took place on 31 July 1967 at Regentsound Studios” (Smith & Jenkins, 12).

The studio eventually became so popular that it expanded its operation and launched a second recording locale, which meant that Regent Sounds Studio was effectively divided into two parts: Studio A on University Street off Tottenham Court Road and Studio B on Denmark Street. Black Sabbath recorded their groundbreaking, self-titled masterpiece as well as the hugely successful Paranoid in Studio A. There is some debate as to when Studio A was up and running; some sources merely state that it opened sometime in the mid-sixties whereas others say that it was in 1968. The timeline is slightly confusing with respect to when exactly the second studio came into being, but there is a strong indication that parts of The Who’s proto-prog metal epic ‘A Quick One, While He’s Away’ were taped at Studio A in 1966, which would then entail that two different Regent Sounds Studio were fully in use by 1966, so let us stick to that notion and idea for the time being, shall we? There are numerous articles, essays, memoirs, and biographies out there that mention the studio’s existence and what it was like back in its heyday when it was buzzing with activity, so feel free to explore its history further and immerse yourself in some of the lovely anecdotes revolving around the place.

If you find yourself in the vicinity of 4 Denmark Street, do walk by and have a look while reflecting on the fact that some of the greatest rock ‘n’ roll tunes as well as ideas and demos for what would eventually become anthems and the soundtrack to a generation were immortalized and captured for posterity at this very address. We owe an awful lot to that place.

Hasted, Nick. You Really Got Me: The Story of the Kings (Updated Edition). Omnibus Press, 2017.