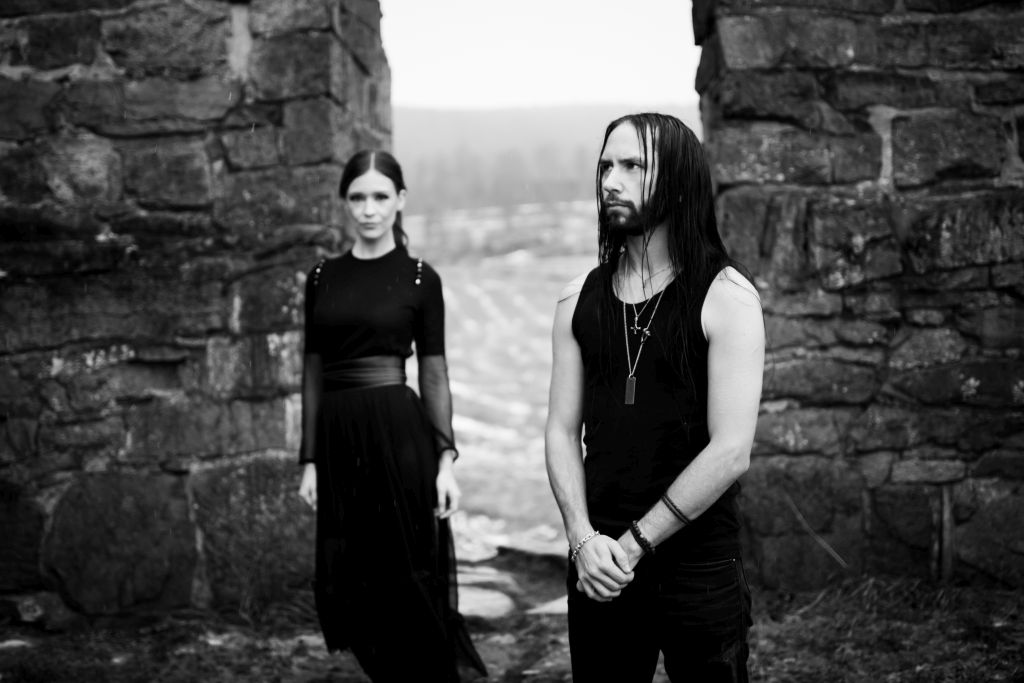 As introduced on their bandcamp page, https://minneriket.bandcamp.com/ , Minneriket is a Norwegian Romantic Black Metal band, and the work of vocalist and multi-instrumentalist Stein Akslen, who created the project for as much a philosophical and spiritual channeling as a musical outlet. Drawing on influences as various as punk and goth yet steeped in the intensity of the early Norwegian black metal scene, Minneriket came into existence in 2014.

Introduce your band, and describe your latest release:
Minneriket is a band transcending the genre boundaries and invoking the feeling of innovative Norwegian Black Metal through new elements and aesthetics, going back to the creative roots and adding a goth perspective. Over the course of the last albums the sound has changed drastically from raw and lo-fi necro sound and to the well-produced recent effort “Gjennom meg går ingen til hvile”.

What’s the hardest part about being a band in this day and age?
As long as you have inspiration, creativity and dedication it is not hard to create music, at least not in our part of the world. We have access to all the equipment we need, and anyone can set up a DAW in a home studio and hit that record button. Perhaps it’s actually a little too easy, it floods the market with a lot of mediocre efforts.

Marketing might actually be one of the more hardest parts these days, because of this over-saturated scene. The generation of today have the attention span of a goldfish, and they put their music into playlists with “hit songs”, without respecting the album format. I might be old fashioned, but I create my music as a concept where the progress of the songs on the album is part of the key. When people skip a song after 10 seconds of their favourite hook, forcing the listener to actually sit down and focus is a hard task.

When did you realise that your project had the potential to be much more than just a fun idea?
I’ve never been looking for “fun” in my music. If I was, I’d work in a different genre. I create this music because it resonates with a certain darkness within the listener. It’s solitude in communion. I go to the deepest parts of the mental netherworld and bring forth something which strikes a nerve which transcends countries and cultures, and speaks to something within those who hear the whisper. As long as I get feedback from the fans about how the music have been important for them in difficult times, and as long as I feel the same fire burning within, I’ll continue creating music in this fashion. But who knows, maybe I’ll do a fun project too…

Tell us about your latest release, why should we check it out?
The latest album “Gjennom meg går ingen til hvile” is a tentpole album of how to do a gothic approach to Black Metal without having it become sterile, overly symphonic or by-the-book. There’s an extensive use of field recordings done in nature combined with somber pianos, a multitude of different voices and instruments, and a songwriting style rarely seen within extreme metal. Orchestration, octavation, harmonizing, jazz and blues inspired, folk elements… It’s avantgarde without being pretentious – it’s just a great fucking album in a style no one saw coming.

How does a song typically come together for you?
I start with a word, a feeling, an idea… an atmosphere. There’s something that wills itself to life. And I try to grasp it, shape it and present it. Usually just a few words make out the foundation, then I start writing the melodies to it to make sure music and lyrics complete eachother. After I’ve demoed up the guitars and drums I usually work on the vocal arrangements before I start building the song from this early skeleton.

How would you describe your sound to an unfamiliar reader?
Unorthodox, challenging but rewarding. There’s a serenity to the brutality which rewards the listener that invests time into the music.

What do you want listeners to take away from listening to your band?
I think music is a form of communication. I can not show the listener something which they not already possess. So it depends on what they bring to the table themselves. You reap what you saw. Perhaps there is a certain openness in the music which could inspire some, but mostly it’s a product of art made for the listener to experience, contemplate on and invest themselves into in order to interpret. More like a painting than a speech.

Where would you really like to tour that you haven’t done so yet, and why?
Minneriket does not play live. It’s a one-man band and touring does not interest me.

How would you say that the sound of your band has progressed over the years?
The atmosphere is largely unchanged, but the execution has had a big progress. From the lo-fi demo like debut album to the more ambient follow-ups and now with a whole new orchestral approach to the songwriting. It’s still rough, but with a wider arsenal.

How excited are you for 2022, and what can fans expect from you?
Minneriket kicked off the new year with the album “Gjennom meg går ingen til hvile” which had been about six years in production. Just a few days ago the lyric video for the song “Regnbuer I Gråtoner” was released (https://www.youtube.com/watch?v=qnqmMWdqnfg). I have started mapping up some ideas for coming music, but it’s unlikely there will be new tunes this year. I do however have a few other musical projects going, so you never know.