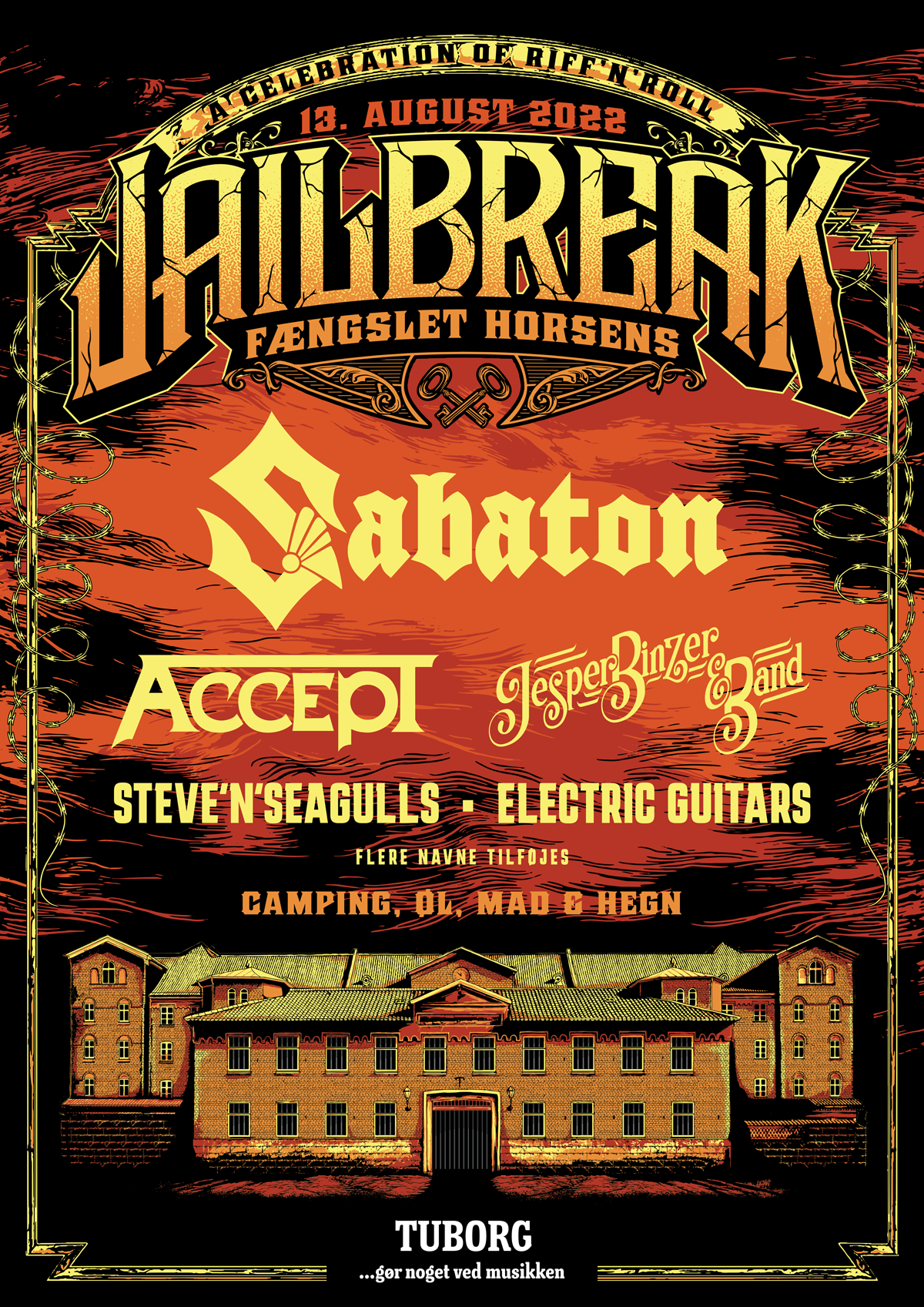 The verdict has been rendered; local and international rock fans have now been sentenced to a full day behind bars where they will be punished with rattling riffage at the new heavy rock event JAILBREAK. The event will take place in Horsens State Prison, and will be guested by a number of hard-hitting bands and artists such as SABATON, ACCEPT, JESPER BINZER AND BAND, STEVE’N’SEAGULLS, ELECTRIC GUITARS and more.

The old state prison in Horsens, Denmark has previously housed criminals for more than a century, but now it’s time for a mass uprising: On August 13, 2022, the prison grounds will host a full day of condemnatory rock music at JAILBREAK! The event will feature two stages – a large main stage in the middle of the prison yard and a smaller indoor stage. The first year of JAILBREAK will be an all-day event with overnight camping options.

“JAILBREAK will reintroduce the rebelliousness to Horsens State Prison by bringing major rock and metal artists to the historic city and by gathering those of us who love rock ‘n roll. We have been lacking a big event in Jutland that pays homage to and prioritises heavy rock, ” states JAILBREAK Project Manager, Jens Karlsson.

At JAILBREAK, the audience will be able to experience a wide range of bands, all of which have raging riffs in common. The audience is guaranteed a solid music event with both heavy-weight and edgy artists like SABATON, ACCEPT, JESPER BINZER AND BAND, STEVE’N’SEAGULLS , ELECTRIC GUITARS and many more on stage.

Horsens State Prison served as a prison for over 150 years until 2006, after which it was transformed into a cultural center for both the city and the surrounding areas. The historic city has undergone a remarkable development, and has over the years hosted several large concerts – often leaning towards the heavier genres.

“Horsens has long had a proud heavy music tradition. The city has been highly influenced by the heavy music industry, and is known for the hard life both inside the prison walls and in the city in general back in the days. JAILBREAK represents the fusion of this interesting history and the simultaneous transformation that Horsens has undergone over the years, and we look forward to celebrating the heavy music genre in this fantastic historical setting with a large and recurring event that really cultivates the community.”

JAILBREAK has been created in a collaboration between the concert organizer Live Nation and the cultural network Horsens & Friends. The goal is to establish a long-standing tradition of celebrating hard rock ‘n roll every year at a festival in Horsens in the middle of Jutland, Denmark.

More info can be found at www.jailbreak.dk, as well as JAILBREAK’s official profiles on both Facebook and Instagram.