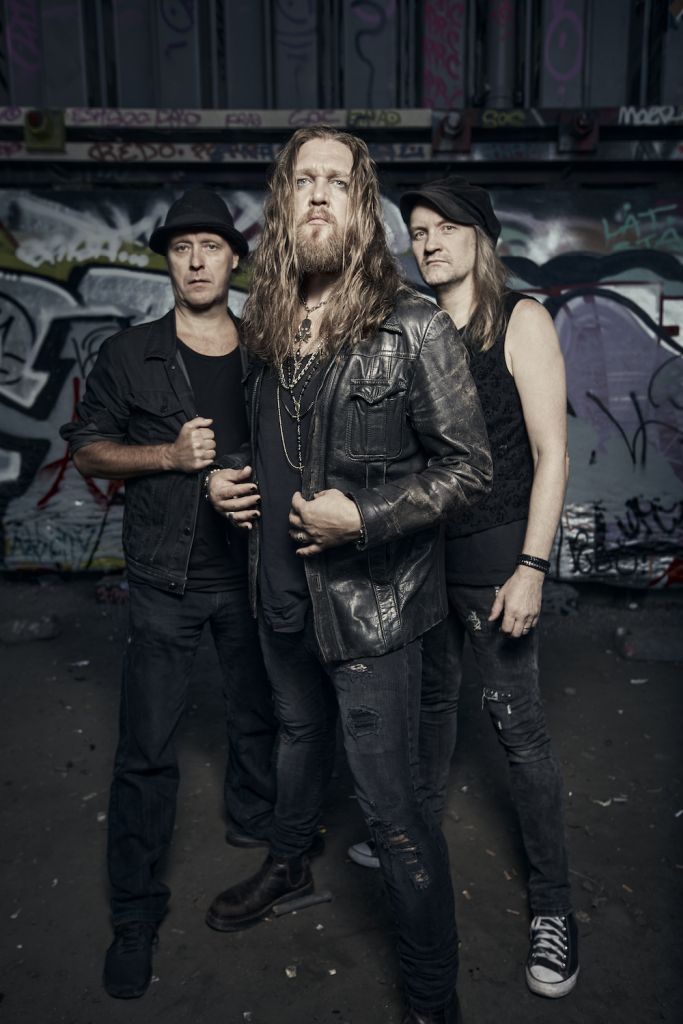 KNIGHTS OF THE REALM – Interview

IN CHAINS OF STEEL – AN INTERVIEW WITH KNIGHTS OF THE REALM

A few weeks ago, yours truly received a fabulous heavy metal opus by the Swedish outfit known as Knights of the Realm that impressed me greatly. Consisting of past and present members of Tiamat, Eclipse, and W.E.T., this musically fierce and spirited trio deliver sharp riffs and effective hooks by the gallons, and there is something to strangely charming and utterly memorable about their glorious old-school metal debut offering that we simply had to have a chat with Magnus "Megalomagnus" Henriksson in order to learn more about the hell-blazing ensemble and why classic-sounding metal with balls the size of Texas to it rules. Read on and pay attention to their plans for next year with respect to tours and gigs.

Greetings, how are you doing? To those out there who are not familiar with your exhilarating brand of bone-breaking metal, could you perhaps outline your band history for us and touch a bit on the kick-ass effort that your self-titled debut truly is?
M: Hello, we are just great, thank you! This band started a year ago as an art by accident you could say.

The 3 of us have played metal covers for a few years together and one day, Lars and I were bored and came up with the idea of compiling 40 cheesy cliché metal words like such as fire, steel, blood, metal, etc. and then asked singer Marcus to use those words to write lyrics for a metal song out of them. 10 minutes later he sent us the draft for the song "Heavy Metal". We recorded the music the very same day and we kept using the same formula. That’s pretty much how the band started. We had no intention of ever recording an album or anything. This was during the pandemic, so it was a way of coping with the boredom and hopelessness of it all.

What inspired you to launch Knights of the Realm in the first place? Was there a certain motivation behind it all or perhaps a need to do something that was quite different to what you guys do in your other bands and projects and whatnot?
M: I think we had a need of doing something completely different to our regular bands. We all grew up listening to early 80s metal and wanted to revisit that era. Besides that, we’re musicians so we want to play as much as possible. Whenever our schedules will allow it, we’re hoping to go out our tour with this band.

Apart from the cover art being pretty damn cool, we have to discuss such epic titles as "Fields of Fire", "When Metal Meets the Beast", "Chains of Metal", and "Blood on Steel" – it is charming and OTT and I fucking love it! In terms of Knights of the Realm’s sound and style, old-school heavy metal is obviously a huge source of inspiration but are we talking about any specific LPs or rather bands/artists in particular that have influenced your way of crafting riffs and arranging songs and so on?
M: I think you can find all of our inspiration from that specific era from 1980 – 1985 with respect to both the album cover and the music. That’s the era that made a big impression on us. Metal was new, fresh, and cutting edge back then. It was still evolving and hadn’t become watered down yet like it did in the late 80s.

How exactly did the record deal with Playground Music come about? Is there a story there worth telling us about?
M: We had no plans of releasing an album in the first place. This was just a way for us to kill time during the pandemic and trying to stay occupied in order to not lose our minds. Later on, Suzan Kverh (who’s a good friend of ours) from Playground Music heard the songs and wanted to support the band and release it. We thought "Why not?". It was a fun idea, so we went with it. It’s extra fun cuz we all know the people from Playground, and we see this collaboration more or less like a family business.

Tell us a bit about your musical upbringing and how you got into hard rock and heavy metal in the first place. Do you recall what your first album purchase was?
M: In the beginning of the 80s we only had 2 TV channels in Sweden. One day in late 1983, Swedish TV aired a 3-hour festival called "Rock Pop" from Dortmund, Germany that consisted of acts like Iron Maiden, Scorpions, Judas Priest, MSG, Ozzy, Def Leppard, and Krokus. As an impressionable teenager that shaped a whole generation of teens in Sweden. From that moment on, a new army of metal heads was born. I think everyone from my generation would agree with me when I say that was the pivotal moment for metal in Sweden.

What are you guys currently up to in terms of band activities? Are you churning out new material in rehearsals these days and can we look forward to a tour in 2022?

M: We’re constantly writing new material and we’re booking gigs for 2022 as we speak. We can’t wait to get this band out on the road as soon as possible.

Thanks once again for doing this interview and best of luck to you guys in the future. Any closing comments?
M: Thanks for having us and for supporting old school Heavy Metal. Hope to see you on the road 2022! Stay heavy! 🤘🤘