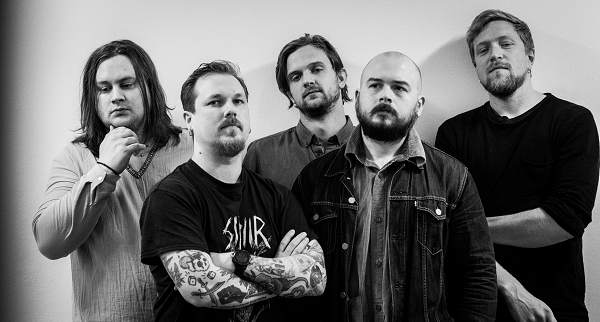 Psychedelic Rockers HIMMELLEGEME dip a toe into the waters of history for the third single taken from their upcoming sophomore full-length album "Variola Vera".  And their chosen subject is none other than one of the notorious, if not the most notorious, of the Roman emperors,  Caligula himself.

Why, you might be asking, has a Norwegian band chosen this well-known miscreant as the subject matter for a track on "Variola Vera"?   Well, it would seem that HIMMELLEGEME see something of themselves, and us, in his flawed character, as the band’s Alexander Vormestrand explains:

So, "Caligula" is a weird one that required an unconventional method of writing from me. Melodically we drew some inspiration from some of our favourite contemporary music, such as AIMING FOR ENRIKE and ULVER, as well as KEVIN PARKER, while lyrically I was inspired by the Roman emperor Caligula. There are so many phases of this person’s life that makes him an interesting character. Many people might even find similarities from their own youth – from being a benevolent boy to becoming a horrible young man. Most of us have phases growing up, so I had to kinda get in character with this one, which may or may not have included lit candles and a "bucket o’crazy" in the middle of the night while my girlfriend slept. The verses depict Caligula  going through different phases, while the chorus is about him finding peace while he gets closer to the end of his life.

"Caligula" can be streamed or downloaded from a number of services at:

Drawing their influence from both Blues and Atmospheric Prog Rock, HIMMELLEGEME’s lineup of  Aleksander Vormestrand (vocals, guitar), Hein Alexander Olson (lead guitar, slide, drums), Lauritz Isaksen (keys), Erik Alfredsen (bass, backing vocals, misc. instruments) and Leiv Martin Green (drums, backing vocals), have come up with a second studio release that is, according to them, not quite a concept album, but which does, nevertheless, have a theme running through it:

The overall themes of the album are the impact we humans have on planet earth, and the destruction we leave in our wake wherever we go. Not only in regards to the planet itself, but also to the people inhabiting it. It’s not a concept album per se – the lyrics are fictional with roots in reality, but based on newer and older events seen from different viewpoints.

By using heavy-hitting riffs, chilling melodies and melancholic lyrics, HIMMELLEGEME have, on "Variola Vera", created a dark, otherworldly, and timeless sound which was recorded  from late spring through to the  late fall of 2020 at Bergen’s Broen Studio. The  album was produced by Anders Bjelland (ELECTRIC EYE / HYPERTEXT) who also handled the mixing and the mastering.

With cover art by Samantha Muljat,  Karisma Records are set to release "Variola Vera" on the 1st of October in CD, Digital, and Limited Edition LP Formats, and it is now available to pre-order from:

The track list for "Variola Vera" is as follows:

"Variola Vera" is now available to pre-order from the following:

More information about HIMMELLEGEME can be found on the band’s Facebook page at https://www.facebook.com/himmellegemeband/

The official video for the track "Blowing Raspberries" from HIMMELLEGEME’s "Variola Vera" album can be seen below and at https://youtu.be/A1f6ihTE2II

The official video by Rasmus Even Hol Skjegstad and Leander Håvik for the track "Natteravn" from HIMMELLEGEME’s album "Myth of Earth" can be seen at https://youtu.be/A1f6ihTE2II