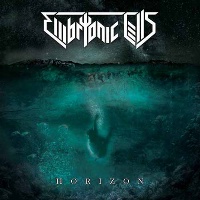 Embryonic Cells? Sounds borrowed from Sepultura’s song on "Arise". But whether or not it is, this French deathened black metal outfit has a knack for economics, what with a three men lineup: Max (vocals, guitars), Dom (bass) and Djo (drums) while no longer requiring Pierre Le Pappe’s keyboarding services, though "Horizon" is drenched in keyboards. The band has been around for as long as I have been the United States resident (1994) yet, in many ways they sound as if "Horizon" was their debut. I know I am being quite a jerk but this album is frustrating. Why?

On one hand, "Horizon" is just your average Immortal deathened black metal, especially on both the opening intro "Crossing", the subsequent "Don’t Serve The King", and more ambient "Carved In My Skin", Uada pulling off this kind of melodic foggy old school double genre much more impressively than this. The Dimmu Borgir "Enthrone The Darkness Triumphant" assault of "Never Let You Fall" is actually middle of the road, mostly because of the excellent Slayer-ic transition around 2:30, and the somewhat instrumental titlle track, "Horizon…"and" To Horizon" (really?) are weird and disappointing. It would seem that this is all Embryonic Cells are capable off.

On the other hand, two epic compositions: "Across The Mountains" and the closing aptly titled "No Boundaries" awe with painstaking attention to detail, ebbs and flows galore, going from acoustic ballad overtones to full on black in jawdropping seamless mastery and ease, even if they do borrow liberally from Hypocrisy. But two out of eight tracks do not a great record make.

Embryonic Cells present an average deathened black metal on "Horizon" that is moderately confused by the strength of two long epic tracks. In fact, were it not for those tracks I would have given it a 3/6 score. Might I, therefore, suggest that on the next effort the trio focuses more on that long, epic direction, abandoning the familiar and average?