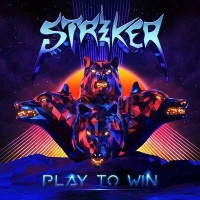 The Canadian heavy/power metal quartet has been around since 2007, has released six full lengths to date and consists of guitarists Chris Segger and Tim Brown, vocalist Daniel Cleary and bassist William Wallace with a session drummer Randy Black hired just for the recording of "Play To Win". In the past, especially on "Armed To The Teeth", the band leaned closer to thrash which they have turned into more power metal on "Stand In The Fire". The self-titled album has been called Striker’s black album due to its more stripped down approach, so its successor, this here "Play To Win" was poised to either further alienate the fans or bring Striker back at their best. Which is it?

I don’t know about Striker being at their best but the album is definitely above its predecessor. However, while traces of thrashy past can be found, their traditional/power metal attack is now augmented by hard rock/hair metal leanings. In fact, Striker themselves are rightfully calling their music "a classic mix of heavy metal, hard rock, and 80’s hair metal" on their website. All performances are indubitably fantastic: Daniel’s vocals are impeccable, with deep highs that could make Bon Jovi fearfully look into his future for competition, Wallace/Black section lockstep with audible, tasty bass licks often independent of the excellent to fantastic dual Segger/Brown guitarwork, everything topped off with excellent powerful production recalling Def Leppard’s classic "Pyromania" or "Hysteria" albums. Striker has an excellent ear for catchy melodies (Position Of Power) and riffs, with most of the songs at the same level, but there are a few notable standouts such as the hair metal anthem "Head First" or slightly Anthrax-ian take on latter Iron Maiden in "On The Run", but the infectious ballad "Heavy Is The Heart" is a definite favorite with a chorus bound to get stuck in your head all day. Lyrically, too, they convey thoughtful messages such as when they ask "how can anyone know the real you, even your closest friends will never know/they’ll only see the front you show" (The Front).

While the material is fairly even with a few standouts it does have a few undercooked tracks. The title track borrows from Living Colour’s "Cult Of Personality" with Cleary even channeling Corey Glover, the Mercyful Fate/Pantera-ic "Summoner" has great riffs but goes nowhere and the closing "Hands Of Time" replaces electric guitar for keyboard with just an occasional power chord accent, which recalls Metallica’s "Waste My Hate" for atrocity, trying to be a ballad but failing even as a song.

Striker does not blow away with "Play To Win" and they don’t even try to, despite the title. Instead, they are trying to experiment within a limited genre, succeeding mostly, while failing some. The weaker tracks do not take away too much from the enjoyment of this album, but the second half of the album is decidedly less impressive than the first and the split difference gives the 4/6 score.