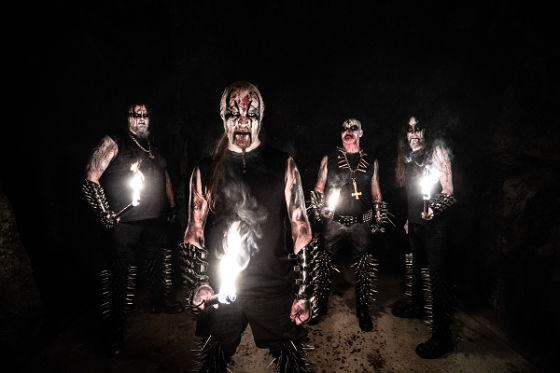 Norwegian Black Metallers NORDJEVEL, whose self-titled debut full-length album was released on Osmose Produtions to great critical acclaim three years ago, are back with a vengeance with "Necrogenesis", an album which sees the band’s core of founder and vocalist Doedsadmiral (SVARTELDER, DOEDSVANGR, ENEPSIGOS) and bassist DzeptiCunt (ex-RAGNAROK), being joined by Destruchtor (MYRKSKOG, ex-MORBID ANGEL) on guitars and backing vocals, and Dominator (ex-DARK FUNERAL) on drums.

The new arrivals have enabled NORDJEVEL to expand its musical horizons and produce an album that promises to be more ferocious than its predecessor, as Doedsadmiral explains:
With the addition of Destruchtor and Dominator to the band’s lineup, NORDJEVEL has never been so strong. "Necrogenesis" is a much darker and violent album. It is also more varied and mature, both musically and lyrically. We definitely did not want to get stuck in a rut and churn out an identikit version of our debut, and fortunately we all felt that we wanted to go in the same direction, so we were all able to work together extremely well on the new songs. Having said that, "Necrogenesis" was a hard bastard of an album to complete, and at times we felt that the universe was conspiring against us, so it became a very personal album for all of us.

To give fans a taste of what they can expect from "Necrogenesis", NORDJEVEL have released a video for the opening track "Sunset Glow". The video, by Necrolust Productions, which was filmed during the band’s 2018 appearance at the December Darkness Festival in Sweden, can be seen here

"Sunset Glow" has also been released as a single, and can be streamed or downloaded at the following https://osmoseproductions.bandcamp.com/album/necrogenesis

Recorded at Velvet Recording in Spydeberg, Norway, "Necrogenesis" was engineered by Nordjevel and Christer Krogh, and mixed and mastered by Patric Darkhyrys at his WSL Studios in France. With Artwork and layout by Vincent Fouquet of Above Chaos, tracklisting for "Necrogenesis" is as follows
1. Sunset Glow
2. Devilry
3. The Idea Of One-Ness
4. Black Lights From The Void
5. Amen Whores
6. The Fevered Lands
7. Nazarene Necrophilia
8. Apokalupsis Eschation
9. Panzerengel
10. Venom Of Serpents (Bonus Track Vinyl, Digipack)