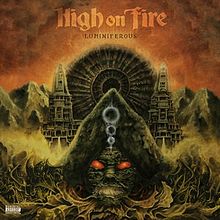 I just reviewed High On Fire’s (HOF) new album "Electric Messiah" (5/6) and realized we at ET never reviewed its predecessor which influenced HOF’s new more melodic direction. "Luminiferous" is different from their usual business for two important reasons: first Matt Pike gave up drinking which clearly shows in his more melodious tone and second, consequently, the band could not have just reloaded the excellent "De Vermis Misteriis" and called it a day. Matt can rip heads clean off with his guitar but in every musician’s life there comes a time when he or she wants to sound, well, more musical. This is what I think happened on "Luminiferous". Did it work?

The production of Converge’s Kurt Ballou, with whom HOF has worked since "De Vermis" afforded Pike to write some of the catchiest, most melodic while not necessarily always brutal stuff to date. Albums such as Corrosion Of Conformity’s "Wiseblood", Crowbar’s "Odd Fellow’s Rest", Down’s "NOLA" and Pantera’s "Reinventing The Steel" all come to mind when listening to this material. Matt Pike vocalizations appear to even be an amalgamate of Pepper Keenan, Kurt Weinstein and Philip Anselmo, respectively, and they are some of the finest he has ever put to tape.

The fact that there are literally two fast thrashy songs on a nine song album speaks for itself. "Slave The Hive" heavily recalls Sepultura’s "Dictatorshit" from the "Roots" album and the title track opens up with the dread and heaviness of Paradise Lost’s "Lost Paradise" and then proceeds to rival Evile and Megadeth in terms of riffs and solos while Pike screams like Slayer’s Tom Araya. These are good and great songs (with the latter superior to the former), for sure, but they are not the best this album has on offer. Those would be the The Black Plot/Sarcosa/The Sunless Years, one of the finest 1,2,3 I have ever heard on a metal album. The songwriting, with cues from Mastodon and Bison B.C. (The Black Plot), Queens Of The Stone Age (Sarcosa), Baroness and even Jimmy Hendrix (The Sunless Years), is superb, with multiple killer riffs, but it is only a mere foretaste of the crown jewel of "Luminiferous", "The Cave", a beautiful, moving ballad in the vein of Corrosion Of Conformity’s Pearls Before Swine/Goodbye Windows or Crowbar’s "Planets Collide", supermelodic and catchy, a true humming tune you can’t get out of your head, especially with Pike’s excellent vocals that resemble Phil Anselmo. Lyrically it harkens back to the Platonic shadow government pulling the strings, which fits snuggly with the overall Illuminati/reptilian race concept of the album. Another standout is more of the classic HOF, "Dark Side Of The Compass", with Panteric tidal waves for riffs and drumwork, great audible pulsating bass and melodic guitarwork reminiscent of Paradise Lost and My Dying Bride and Matt Pike sounding, again, like Phil Anselmo.

Like "Electric Messiah", "Luminiferous" is excellent but not flawless. "Slave The Hive", "The Falconist" and the closing "The Lethal Chamber" are good songs but seem a little safe and simple for comparison. Interestingly, the latter has that classic Obituary-ish sound that will become the basic of many of the songs on the next album.

As it is, "Luminiferous" is another worthy addition to the large HOF’s catalogue. There are no fillers and the most memorable songs are some of the best stuff Matt Pike has ever written. Does it get better 3 years later? Of course, but is that a bad thing?

RING VAN MÖBIUS – When the sea and The Universe Were At One (Or; The Introduction Of The Octopus O

REMEMBER THE LIGHT – The Outcome