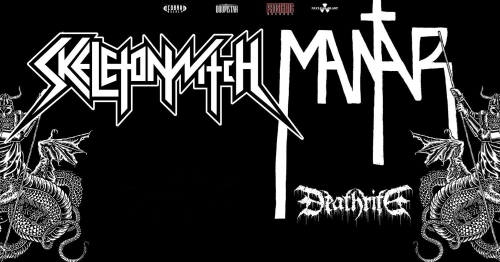 Although they came together as a band in 2003, the members of Athens, Ohio’s Skeletonwitch draw the bulk of their inspiration from artists and musical styles born all of two decades earlier: namely the undying flame of classic Bay Area thrash; its creative bedrock in the New Wave of British Heavy Metal; and, to a lesser degree, death, black, and Viking metal. First introduced via 2004’s independently released At One with the Shadows album and 2006’s Worship the Skeletonwitch´s retro-fitted yet modernly executed creative vision arguably reached a new level of maturity with 2007’s Beyond the Permafrost full-length, their first for Prosthetic Records.

In any case,Skeletonwitch members Chance Garnette (vocals), Nate Garnette (guitar), Scott Hedrick (guitar), Eric Harris (bass), and Derrick Nau (drums) then set out to prove their metal mettle on tour, Flying V’s cocked and loaded. After some hefty touring, Chance and Nate Garnette, Hedrick, Nau and bassist Evan Linger  headed into the studio to begin work on album number two. The resulting Breathing the Fire dropped in 2009, and debuted at number 151 on the Billboard 200 chart. Arriving in 2011, Forever Abomination was the first Skeletonwitch outing to feature new drummer Dustin Bolties, and 2013’s critically acclaimed Serpetns Unleashed reached number 62, but would prove to be the last go-around for vocalist Chance Garnette, who was fired in 2015 due to his substance abuse problems. The following year the band added Wolvhammer vocalist Adam Clemans to the roster and release a new EP,

The Apothic GloomNorthern Germany’s feral two piece MANTAR have achieved more in five years than most bands twice their age and size. The product of a twenty year friendship between guitarist/vocalist Hanno Klaenhardt and drummer Erinc Sakarya, theirs is a success story born entirely of one thing: hard work, with 3 albums, an EP and a live release already to their name. Releasing their 2014 Svart Records debut »Death By Burning«, an uncompromising clash of stripped-back punk attitude and metal intensity to instant critical acclaim, the band toured relentlessly, gracing stages the world over, including the hallowed likes of Roadburn (NL), Wacken Open Air (D) and Maryland Deathfest (US). They used 2016’s »Ode To The Flame«, their Nuclear Blast Records debut, to further build upon their incendiary live reputation, conquering not only Europe and the US, but Russia, Japan and South Africa

Now, following a brief period of repose which saw Hanno move to Florida, MANTAR return with »The Modern Art Of Setting Ablaze«, a short, sharp shock that hones the hungry riffs and breath-taking pace of their previous records. "We skipped the bullshit," explains Hanno. "I wanted 3 or 4 minute songs; bam, bam, bam. Every song different, catchy – that’s what rock and roll is about."