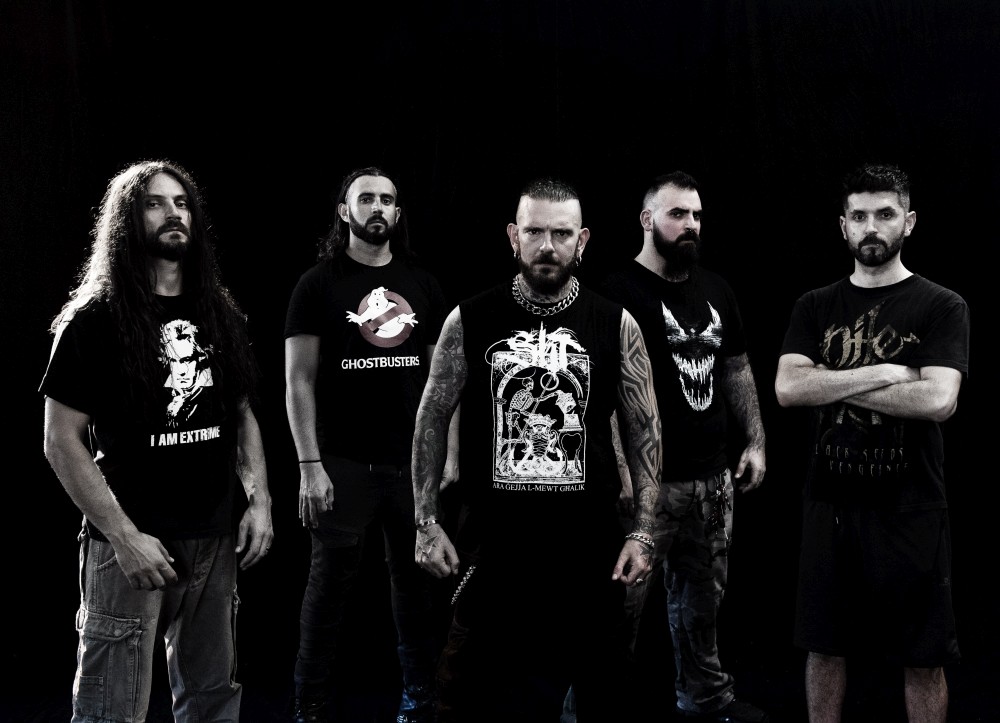 "’Christ Infection Jesus Disease’ is the 3rd single to be released by COFFIN BIRTH from the album "The Serpent Insignia", set for release on 30th November 2018 on Time To Kill Records. The song takes no prisoners. Sonically it’s Motorhead on amphetamines and lyrically it is an explicit, direct, and bold assault on the fallacy and fraud that religion and Jesus – its most coveted personality – represents. The holy deceit turned into a sickness, a cancer which has been spreading for thousands of years …and Coffin Birth is the cure".
COFFIN BIRTH is the result of a collaboration between some of the finest musicians from the Italian and Maltese extreme metal scenes, namely Giulio Moschini (HOUR OF PENANCE), Marco Mastrobuono (HOUR OF PENANCE, BUFFALO GRILLZ), Francesco Paoli (FLESHGOD APOCALYPSE, ex-HOUR OF PENANCE), Davide Billia (HOUR OF PENANCE, BEHEADED), Frank Calleja (BEHEADED).
The band is now ready to release "The Serpent Insignia", its maggot filled first full length album and unleash an assault of vermin infested live shows in a filthy concotion of old school death metal, rock’n’roll and punk. From the dead to the dead.
"One day Marco and myself started experimenting with the legendary HM2 pedal from the 80’s in an attempt to add some new flavours to the Hour of Penance sound but it turned out that we simply could not incorporate its sound into the music because of the tremendous amount of gain and noise that this small pedal produces. However, since we are both huge fans of that exceptional, vintage yet brutal tone we started writing music on the side. Unknowingly and in a short time we ended up with 10 kick ass songs ready to be recorded. It was at this point that we decided to turn this into a proper band and went on to give a call to some friends with whom we’ve travelled and toured throughout the years. This was the right occasion to make some kick ass music together!

The first person we called was our close friend Francesco Paoli (Fleshgod Apocalypse), who also was part of the Hour of Penance line-up from 2006 to 2010. Shortly after we contacted Davide Billia and Frank Calleja from Maltese deathmongers Beheaded to complete the Coffin Birth line-up, which we are extremely happy with".