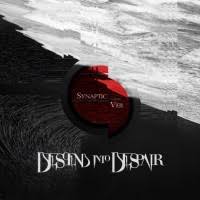 Weltschmerz (German: World Pain) is a brooding and ever-looming feeling that physical reality can never fully satisfy the demands of the mind. The Romanian Funeral Doomsters Descend Into Despair, have played with this concept in their masterful, first, double album "Bearer Of All Storms", an album I enthusiastically raved about here and gave the highest marks. Having contacted the band I received then a fateful response "We are already working on a follow-up which we believe to be a considerable improvement". "When conflicted with the obtuseness of this world, our response (to Weltschmerz) became increasingly nuanced – says the lyricist Korbea Pleata "Florentin Popa" Neagra (clean vocals, acoustic guitars, bass, keyboards) – ranging from the chronic, almost surreal scream of anguish of our earlier works to a more stoic, almost blissful in a masochistic sense, realization of the freedom one can find in embracing pain…The veil here is ambiguous and double-sided: “objective” reality imposes a layer of limitations onto our mental landscape; but our inner, “subjective” reality lays a veil of concepts on top of the physical reality as a coping mechanism" So much from the creators. What of the creature?

The creature, collectively animated by Cozaciuc "Coza Xander" Alexandru (vocals, guitars, drums), Korbea Pleata "Florentin Popa" Neagra (clean vocals, acoustic guitars, bass, keyboards, lyrics), Dragoș C. Laivod (guitars), Cosmin Farcău (guitars), Alex Costin (bass), Luca Breaz (drums), Flaviu Roșca (keyboards), as you may recall from the conclusion of my own interpretation of "Bearer Of Storms", has died, mercifully killed by Heaven who could not bear to watch his demonic depravity. Remarkably, the creators of "Synaptic Veil", with whom I shared my interpretation, seem to have built up on that ending because the opening cut "Damnatio Memorae" reveals the being from "Embrace Of The Earth" (the closing track of "Bearer"), supposedly annihilated by Heaven’s merciful decree yet seeing himself a martyr a veiled reference to Jesus Christ (nails in my flesh, crowds roar) despairing of his fate, somehow preferring to live for why should he have died, what evil had he done, as gargantuan Alexandru/Laivod/Farcău guitars all at once spell out My Dying Bride, Katatonia and Isole inspiration, particularly in the way Neagra croons in that heartbreaking way Crister Olsson sang on "Bliss Of Solitude", Alexandru/Breaz drums rhythmically slowly driving you into madness bolstered by the double Neagra/Costin bass, Alexandru demonic roars resembling George Kosmas (Be’lakor) with sinister Neagra/Roșca double layer of keyboards, every member the heart, soul, mind and spirit behind the "Synaptic Veil", "Damnatio" simple on first encounter, serpentine and convoluted upon further communion.

Seemingly similar but decidedly different as it progresses, "Alone With My Thoughts" marries My Dying Bride’s "Edenbeast" with Paradise Lost "Your Hand In Mine", the being, disembodied and not-existent yet somehow existent as pain body, to quote Eckhart Tolle, knowing he’s alone hallucinating of his former lover or companion or both until she dissolves and he’s alone again, definitely my favorite track and indeed, a wise choice of a video single made. The center piece and the second most ambitious track, "Demise", expands further on the same gorgeous melodic charm, the being realizing that perhaps he is not immediately eliminated but persists as this unidentified energy that thinks itself equal to God, worthy of highest praise, as he fights between wanting to remain thus or dissolving into nothingness, both choices seemingly within his power, musically adorned with delicate violin, piano, organ, cello, the band and God only know what else.

Similar to "Alone" in both form and scope "Silence In Sable Acrotism" reveals the being becoming aware of an antibody, his negative self, the anti-matter and it wants to be worshipped alone above him, above energy, which is either conquered or absorbed within, as in the final chapter, "Tomorrow", the being rethinks back his life, his existence, the entire Universe, finding no point yet thinking himself victorious over an unspecified enemy, stuck in forever but waiting for tomorrow, tortured by the "entity" alive yet not breathing, to cruelly paraphrase a non-related Killswitch Engage album. Musically, Descend Into Despair throw in everything that made "Bearer Of Storm" such a delight and that "Synaptic Veil" hinted at, everything stretched to its breaking point as the veil finally tears as if to mimic that ancient holiest of holies from 2000 years ago separating flesh and spirit for eternity as that Ultimate Sufferer gave up the ghost, and as if to confirm the album cryptically and coldly ended by receding church organs. What of the creature? He is alive. And he is dead. Or we don’t know. But we believe. Like the oracle of Mr. Anderson/Neo from the Matrix, we don’t always know, but we believe.

"Synaptic Veil" is the crowning achievement from artists who were already above average on their EP "Vanity Devotion" entered mastery on their first album and secured their position among the top doom masters such as My Dying Bride, Paradise Lost, Katatonia or Isole on its follow up. The sound is powerful, ultraheavy, oppressive, truly crushing, dark, bassy and very unique, the performances are spectacular and the ideas developed to its utmost. Whereas "Bearer Of Storms", and only in retrospect, seemed to take a long time to express the fullness and futility of human existential anguish thus requiring over 90 minutes (similar to Esoteric), "Synaptic Veil" says more and more fully in just over 57 minutes. Very, very highly recommended.