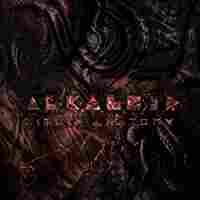 "Malkuth Grimoire", the German progressive death metallers Alkaloid’s debut album blew me to twelve smithereens it comprised, cutting edge music for metalheads who enjoy over-thinking metal. According to Metal Injection, Alkaloid, featuring Florian "Morean" Magnus Maier (vocals, guitar), Christian Münzner (guitar), Danny Tunker (guitar), Linus Klausenitzer (bass) and Hannes Grossmann (drums, production), are "seeking to reconstruct the genre at a molecular level and morph the very particles that make it up". "Whereas the previous album dealt with rearranging existing particles into new stuff, this one deals with changing the particles themselves", informs guitarist Morean, "If you could manipulate and generate matter on a subatomic level, what becomes possible?” Since the debut was already fantastic I awaited the follow up with baited breath on the edge of reviewer’s seat. Was it worth the wait?

Recalling Yes’ "Owner Of The Lonely Hearts", “Kernel Panic” reveals the protagonist frustrated with the human condition, aiming to reduce himself to malleable material for new species as Morean vocals morph into Steffen Kummerer’s (Obscura) amidst Morean/Münzner/Tunker thunderous death riffage. Gojira covering Morbid Angel’s "Where The Slime Live"/"Blessed Are The Sick" separated by acoustic Gorguts calls for tearing down of all places of worship and abolition of all religious thought, the chief corruptor of mankind in "As Decreed By Laws Unwritten", our hero still small and insignificant in the absurdly comparatively vast "Azagthoth" Universe filled with Megadeth’s "Killing Is My Business" guitar picking turned Fear Factory/Machine Head riffs straight from Morean’s children’s opera, with Sepultura’s "Chaos AD" drums, "Liquid Anatomy" initiated with Megadeth "Diadems" acoustics turned Dimebag Darrel melody, no longer constrained by time and space, aptly cued by Tool-like structure of "In Turmoil’s Swirling Reaches", Darkane echoing Metallica’s "Call Of Cthulhu". Sui generis, he yearns for a companion, possible allusion to God creating the Universe, very polyrhythmic Morbid Angel/Voivod riff similar to Metallica’s "Enter Sandman" with 311 reggae enhancing "Interstellar Boredom", as the matter shockingly assumes constraints of time and space, defeated with death metal extreme at the end of audibility, amazing guitar acrobatics, reggae and incredible melodicism that seals "Chaos Theory In Practice" as one of my favorite tracks, (6:41-7:31 the most satisfying part). Written around Rachmaninov’s “The Isle of the Dead”, "Rise Of The Cephalopods" is as fierce and original as unpredictable, beautiful Countdown To Extinction/Youthanasia Megadeth acoustics and guitar melodies with now Kreator/Testament, now Anata/Death and then Into Eternity phased by Pantera’s "The Sleep", nearly twenty (20) minutes of matter mutating in a horrifyingly Lovecraftian fashion, spawning terrifying creatures with an unspoken question hanging in the air: to what extent can mankind afford to play God?

"Liquid Anatomy" is undeniably top notch material with ebbs and flows previously unthought of but some tracks are a little too stretched in progression for the purpose of conveying the concept, and, while "Kernel" and "Laws Unwritten" are immaculate, already on "Azagthoth" the stretching of ideas breaks the momentum. Since "Celophods" is tight as lamb’s testicles in subzero temperatures, with some editing, the title track joined in holy matrimony with the similar "Swirling Reaches" and "Interstellar Boredom" alchemically synthesized with equally devastating "Chaos Theory In Practice" would have been more effective as two instead of four separate entities and thus the whole stretched out affair made more palatable.

Whereas "The Malkuth Grimoire" was a flawless masterpiece, "Liquid Anatomy" is an excellent progressive death metal album, with flawless performances, mind-blowing musicianship and Grossman’s flawless production as expected yet with songs that this time around exhibit greater parts than their sum. Hopefully Alkaloid will find the proper balance on the next album as I will still await it with the same expectation.