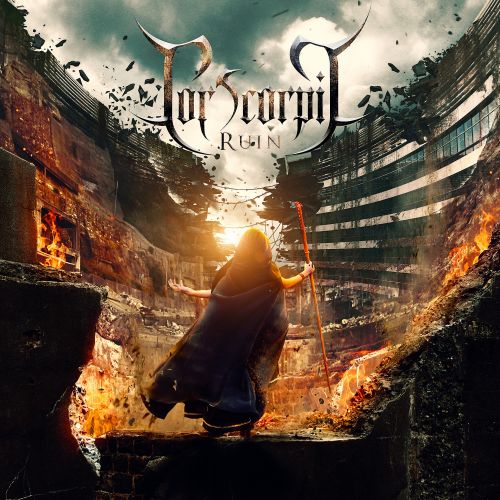 It has been quite a while since the Norwegian exponents of melodic and epic metal known as Cor Scorpii last graced us with an album. Luckily, the wait is now over and this eight-track opus of theirs is about to be released via the ever-reliable Dark Essence Records quite soon. Ten years is a long fucking time to wait, so I was curious as to what Cor Scorpii anno 2018 would sound like, but fortunately, these guys have stuck to their guns and conceived an album that sounds just like a successor to "Monument" (2008) ought to sound. "Ruin" is more of the same, but delivered with a little more class and aggression compared to earlier on.

True to form, Cor Scorpii’s compositions are filled to the brim with brooding melodies, sharp riffs, sweeping keyboards, majestic arrangements, and plenty of musical diversity. Although the tone and style of "Ruin" lean toward black metal and pagan metal, it is evident that both classical music and folk music have served as even greater sources of inspirations to the band this time around. In fact, many of the song structures and the way in which the different parts and sections flow together so seamlessly have more in common with bombastic and thunderous classical music as opposed to extreme metal. Also, the melodies themselves seem to inhabit these folk-like characteristics that flow in and out of Cor Scorpii’s dense soundscapes and provide those with a strangely archaic vibe and feel. The main draw of "Ruin" is the way in which contrasts and opposites wrestle with each other within each song. There is both tension and release, and it is awesome to experience how things come together only to be pulled apart again. There is that sense of the harsh, wild, and untamed on the one hand, but then you get all those introspective and moving parts too, which is pretty neat. My gripe with "Ruin" is that the vocals are somewhat one-dimensional and lack variety. The music is exciting and full of cool twists and turns, but the vocals are slightly lackluster and sound a little underwhelming in places, almost as if they lack passion. Still, they get the job done.

Parallels and nods to acts such as Windir, Vreid, and Borknagar do abound, which is hardly surprising given that Gaute Refsnes (keyboards, clean vocals) was once a member of the former ensemble, but the fact of the matter is that "Ruin" is definitely worth seeking out and immersing yourself in if acts such as Galar, Vintersorg, Iskald, Mistur, and the ones mentioned above appeal to you. The musicianship is strong, the production is competent, the album is solid all the way through, but none of the songs truly stand out and come across as monumental and all-out compelling.

PLANET EATER – Blackness From The Stars

STEELMADE – The Stories We Tell