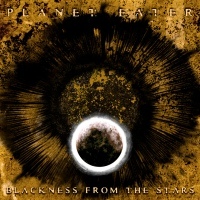 PLANET EATER – Blackness From The Stars

One of the reasons the postmetal/groove Canadian band Planet Eater exist is because Troy Breich was not content to merely be singing and bassing for Into Eternity, but, evidently, wanted to do something totally different. Planet Eater is closer to early Mastodon with generous texture of Meshuggah but, thankfully, in an interesting way.

Contrary to what encyclopedia metallum will have you believe the basis of Planet Eater’s sound is neither death metal or thrash, though, these elements are, admittedly, present (Pile of Bones, Cold Confines, Kill On Sight) but rather postmetal, groove and hardcore (A Fault To Fix, The Spoil), bordering on nu metal (Lies Evolution, Suffer What They Must). They take quite a bit from Pantera, whereby "Kill On Sight" verses recall Suicide Note Pt. II (The Great Southern Trendkill) and "Lies Evolution" the faster parts of "Vulgar Display of Power", (with Donovan Turner’s excellent deep Anselmovokills enforcing the association) as well as Crowbar, Down or Mastodon (Pile of Bones, title track). The melodic aspects are created either by reaching heavily into more interesting Meshuggah and Neurosis (Suffer What They Must) or by recalling early 90s Prong (Boats, A Fault To Fix, The Spoil). This combination works best when it is balanced and the best example is the downright phenomenal "The Spoil", where the hardcorish riffs are so raw, blunt and merciless it makes my brain hurt and that is where the melodic sensibilies come into play, light and dark beautifully constantly rivaling for primacy. What I would advise to either fade out or simply chuck is the nu metal influence (particularly Slipknot) as it makes "Lies Evolution" stick out like a sore thumb and almost ruins the subsequent "Suffer What They Must". I am impressed, though, with the way the album ends as the sinister guitar wailings on top of the excellent ominuous riff remind me of classic Immolation.

Planet Eater may not be reinventing the wheel with "Blackness From The Stars" but they provide an enjoyable experience with striking originality for a debut. Obviously, as such, it is far from perfect and it would be even weird if it was. The stage has been set, the formula announced and now, as with Mastodon’s uneven "Remission", I trust their "Leviathan" is poised to take our breath away.