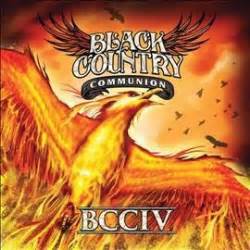 The hard rock revelation that is Black Country Communion, which is comprised of vocalist/bassist Glenn Hughes, guitarist Joe Bonamassa, drummer Jason Bonham, and keyboardist Derek Sherinian, has risen again and answered our prayers in the shape and form of this ten-track effort simply entitled "BCCIV" (the vinyl version includes a bonus track, just so you know). Kicking things off with the punchy "Collide", the group unleashes a never-ending torrent of high-octane riffs, glorious melodies, divine vocals, and crashing drums. As hard-hitting and groovy as the album is, the diversity that is on display here is stunning to behold. The songs encompass so many different moods and emotions and seem to move between them seamlessly. Hughes’s vocals are both heartfelt and haunting, Bonamassa’s impressive guitar playing ranges from gritty to gentle, Sherinian adds texture and depth to the song material, and Bonham is simply put an insanely skilled drummer who adds so much color and variety to the tunes on the disc.

There are plenty of dramatic and exhilarating moments to be found thoughout songs such as "Awake", "When the Morning Comes", and "Over My Head". The mountainous groove of "Love Remains" is irresistable while the moody "The Cove" will get underneath your skin. There is no shortage of great hooks here, folks. "The Last Song for My Resting Place" is a melancholy and yet strangely uplifting journey that has to be experienced.

Is "BCCIV" the best album by these four gentlemen yet? Well, the fact of the matter is that "BCCIV" is the band’s most cohesive and coherent output to date, which is saying something. The album just oozes class and the production courtesy of Kevin Shirley does the tracks justice. It is a highly memorable musical affair that retains its momentum all the way through. On top of that, it sounds focused and sharp from start to finish. Nearly every song is climactic and a rewarding listening experience. There is very little not to like here. Any fan of quality hard rock out there ought to invest in this explosive album ASAP. A most welcome and superb addition to the Black Country Communion canon.