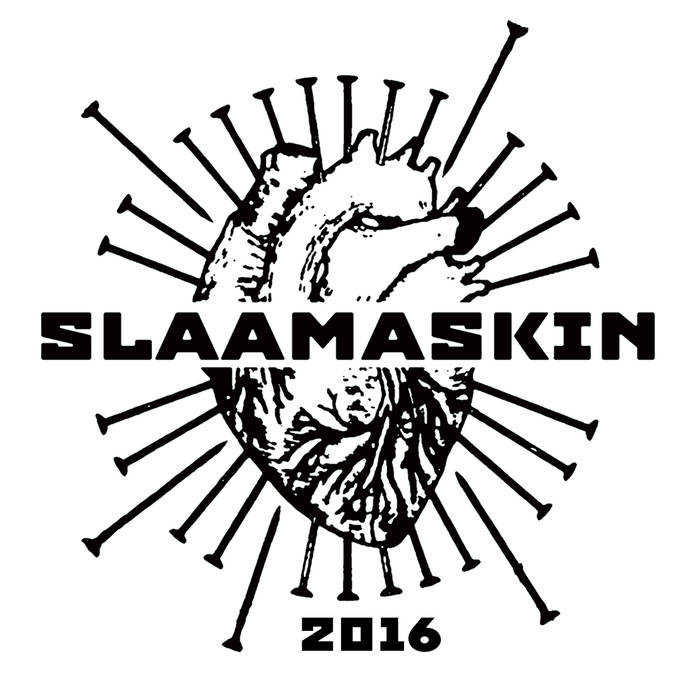 A little late in terms of reviewing this 2016 release by the Norwegian ensemble Slaamaskin, but better late than never, I reckon. Slaamaskin is a hard-hitting and ugly outfit with an aggressively punky and hardcore-like vibe to it, although I would not really classify it as either of those two, but the music possesses a truly raw, vibrant, and in-your-face attitude that harkens back to some of the pioneers within the aforementioned genres. However, this EP is metal, but with a certain individual touch to it. In other words, I really dig what this Norwegian quintet is bringing to the table.

Simply and effectively titled "2016", the five roaring and strangely brutal tunes that constitute this self-released EP are all quite memorable and sharp. When I say strangely brutal, it is not that it is brutal in the traditional sense of the word, but more along the lines of the music being highly effective and that it feels like a kick in the groin at times, which is also emphasized and underlined by the vocalist’s rather authoritarian and harsh voice. Simple riffs and melodies, lots of groove, a thick and pulsating atmosphere, and intense all the way through. The sound of the drums is orgasmic and the same goes for those beefy bass lines that are equivalent to nine inch nails being driven into your skull. Awesome! Producer Bjørnar E. Nilsen is a goddamn genius on so many levels, so I say he was clearly the right man for this job. It definitely sounds like that.

"2016" is one of the more entertaining and cool Norwegian releases that I have had the pleasure of listening to recently, so check this one out on Bandcamp at some point, just keep in mind that it is neither relaxing nor mellow. This shit will tear you a new asshole, so be prepared!