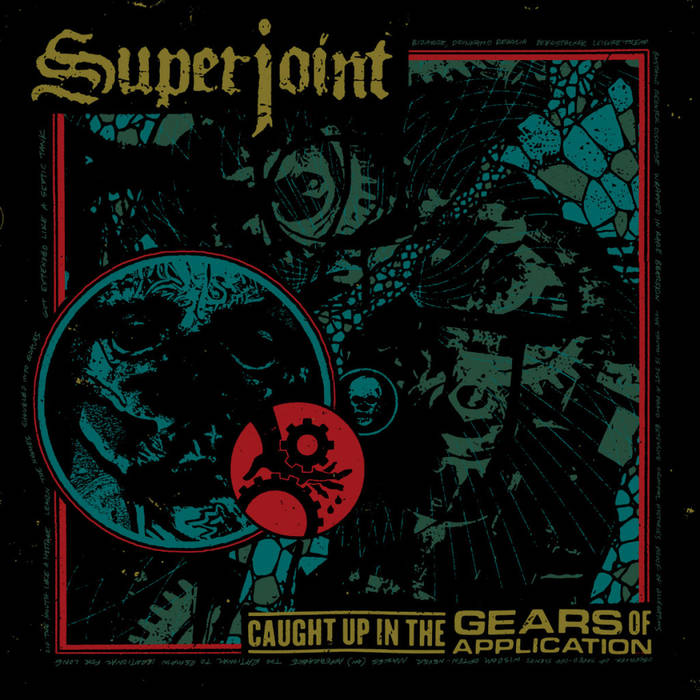 Hell yes! This is just what the good doctor ordered. A vicious and insanely catchy dose of sharp and raw hardcore metal of the highest caliber. I have no idea why it took me so long to review this excellent disc, but better late than never, right? As most of you know, legendary figures such as Phil Anselmo (vocals, guitar) and Jimmy Bower (guitar) as well as Kevin Bond (guitar), Joey Gonzales (drums), and Stephen Taylor (bass) constitute what is now known as Superjoint. That line-up basically says it all, I think.

There can be no doubt that Superjoint is a bunch of incredibly talented musicians, but, more importantly, they write absolutely killer songs that stay with you long after you have stopped listening to them. Make no mistake. "Caught Up in the Gears of Application" means business and you had better not stand in the way of this ugly fucker, because it will destroy you if you do. It is a furious and downright nasty assault on each and every sense known to man, but it will make you reflect on things. Read the lyrics and listen closely to the shades and nuances of each song. There is more to them than meets the eye, and personally I found the lyrics to be refreshing, honest, and highly relevant considering the day and age we live in. The riffs fly like bullets and the aggressive tone of the whole thing is both impressive and overwhelming. As to the production, I can tell you that the album sounds raw and organic, but then again, the songs themselves also sound as if they were conceived organically in band rehearsals, so everything about it just feels RIGHT! Cohesive, coherent, and brilliant from top to bottom.

There is very little point in listing favorite cuts and tunes, because all of them are more or less awesome, but if I was forced to name-drop a few of them it would be the crunchy and crushing "Burning the Blanket", the hard-hitting and utterly memorable "Ruin You", and the twisted and moody title track. The closing track, "Receiving No Answer", will grind you down and leave you there. No question about it. A great ending to a great album.

"Caught Up in the Gears of Application" reeks of honesty and truth. In many ways, it is a relentless and brutal album, but it is varied and dynamic as well. The first time I listened to this was on a dreary and sleep-deprived Monday when the bus for work was late and overcrowded, the coffee tasted awful, and my colleagues acted like retards for 9 hours straight, but Superjoint took me to a far-off place where everyday shit like that counts for nothing and razor-sharp determination is everything. Trust me when I say that this album does wonders for my mind and soul on days like that. You should try it, too. Easily one of the best releases of 2016.

SIMON REYNOLDS – Shock and Awe: Glam Rock and Its Legacy…