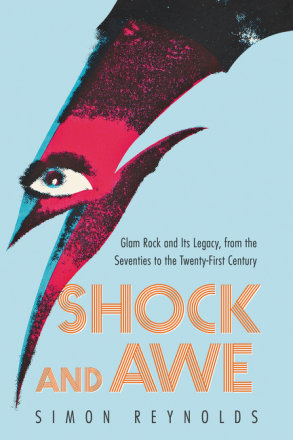 SIMON REYNOLDS – Shock and Awe: Glam Rock and Its Legacy…

This whopping thing of a book entitled «Shock and Awe» by author Simon Reynolds is nothing short of a near-flawless exploration of each and every aspect of glam rock and how this particular style (or genre, if you will) of music relates to countless other artistic, ideological, and philosophical movements out there. That probably sounds very academic to some of you out there, and the truth is that this exhaustive study of glam rock is indeed quite academic in nature, which is to say that it is structured, methodical, and utterly in-depth, yet it is by no means a boring or an uninspired read.

No stone is left unturned as Reynolds discusses how and why the genre came into being, where it originated from, where it eventually went years down the road, and how it fits into a larger cultural context. Key figures and bands such as Alice Cooper, David Bowie, Marc Bolan, Slade, Mott the Hoople, Queen, New York Dolls, and Lou Reed (just to list a few examples), are thoroughly examined, and the more one reads, the more apparent it becomes just why glam rock is also relevant when discussing other genres of music such as hard rock and heavy metal. It is highly fascinating to see Reynolds weave all the different threads together and show how the characteristics of glam rock crop up again and again in other genres, both the ones that predated glam rock and the ones that followed in its wake.

One thing that I really dug while reading it is when Reynolds injects personal anecdotes and experiences into the larger narrative. I found those to be very heartfelt and even a tad sentimental in a good way. One can also tell that Reynolds is deeply devoted to the subject matter at hand, which probably accounts for why he is able to place glam rock within such a large artistic context and relate it to so many other things in such an enlightening and convincing manner. Even movements such as postmodernism and feminism not to mention different political agendas and identity politics are touched on. Very interesting indeed. Needless to say, there is also the emphasis on fashion, the obsession with fame, the larger-than-life personas, the theatrical excess, and basically everything else that made glam rock what it was and is. Like I said, Reynolds leaves no stone unturned. It is all here.

"Shock and Awe" is a comprehensive and compelling study of what made glam rock so attractive (and at times repulsive). It is extremely rich in detail, there are countless interesting stories and anecdotes scattered throughout, and each chapter is basically a small revelation in and of itself. The thing is, whether you are into early 70s rock such as Alice Cooper and T. Rex or the 80s heavy glam rock variant as championed by Motley Crue and Twisted Sister, there is something of value in this book and an awful lot to learn for all of us.