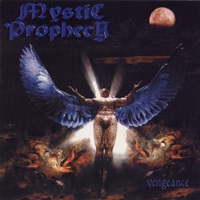 After 15 years, we finally see the debut album "Vengeance" from Mystic Prophecy get a proper re-issue. Originally available on the German B-Mind Records, the band elevated their status in the power/heavy metal community through a consistent release/tour schedule, beyond the fact that guitarist Gus G would be a part of their first three efforts. Those not in the know of what to expect – this is fairly aggressive European oriented heavy metal, with loads of Accept, Judas Priest, Exodus, and Forbidden oriented factors to win over the consumers.

The material floats between speedier numbers like "Sky’s Burning" and "Damnation and Darkness" or the slower, pound your fist in the air anthems such as "Dark Side of the Moon" or "When Shadows Fall". Original album closer "Fallen Angel" is an 8:34 epic that contains many spirited drum passages from Dennis Ekdahl, a horror-filled keyboard line that weaves in and out of the arrangement plus Gus G showcasing all of his neo-classical runs and superior guitar hero knowledge. If you choose to invest in the limited-edition digipack, you’ll be privy to two live tracks from 2007 with "Evil Empires" and "Masters of Sin" – high octane renditions that convey the band’s energy from the stage.

Beyond the fact that this re-issue has collector implications for all things Gus G related, Mystic Prophecy’s longevity and commitment to the metal cause deserves accolades as well. Those who love the discography through the band’s 15-year plus recording career will want this debut record – and it still stands up fairly well given a remastering from vocalist R.D. Liapakis.