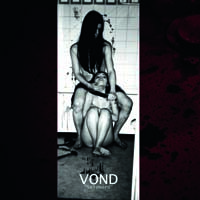 It is beyond me why the brilliant outfit that was Vond never really gained more of a following in that filthy cesspit known as the underground. After all, the three albums that Mortiis released under the Vond moniker are all brilliant and yet they are all slightly different to one another. Each of them embodies certain morose and unsettling characteristics, but, like I said, the records are somewhat different to one another. Strictly speaking, Vond never fed you the exact same thing twice, which, obviously, is a good thing, but there is a red thread of sorts between the albums and one can trace a musical progression along the way that is both interesting and fascinating to follow. Anyway, I am drifting here, so let me get back on track. The debut album appropriately entitled "Selvmord" was originally unleashed upon the unsuspecting masses back in 1994, but, unfortunately, it has been out of print for quite some time now and damn near impossible to locate anywhere. Luckily for all of us, Mortiis and Funeral Industries decided to reissue the Vond classics on LP and CD, as well as digitally in early January 2017, and I could not think of a better soundtrack for a dark and dreary January than those albums right now.

"Selvmord" is a truly bleak album that reeks of despondency, longing, and loneliness. The melodies are strong and memorable, and the sound is warm and organic. It is utterly dark and yet strangely beautiful as well. Lots of wonderful dichotomies wrestle with each other within the music, which probably accounts for why I find it so difficult to sum up just how the four tunes that constitute the album actually make me feel. They range from reflection and melancholy to a sense of pitch black destruction and further on to feelings of the sublime. In other words, it is way more dynamic and varied than you would think. Just listen closely to the subtle details and shadowy nuances that creep in here and there and allow yourself to be carried away.

Singling out any favorites would be a futile exercise as the four pieces all complement each other and form a larger whole. I strongly recommend that you listen to "Selvmord" in one sitting and pay close attention to what is going on. It is a musical journey that is impossible to shake off once you reach the end. If anything, you want to go back and embark on that very same journey again. In terms of atmosphere, this may not be as sinister and unnerving as the following two albums turned out to be, but in terms of the emotions Mortiis poured into this musical manifestation of his, there can be no doubt that this is straight from the heart. You can almost reach out and touch the sadness that emanates from "Selvmord". A superb record!