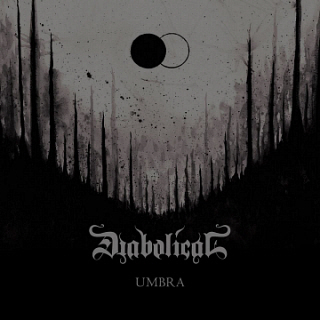 I have always had a thing for the Swedish outfit Diabolical. Not in the sense that I am a devoted fan or anything like that, but I do think that they may released some rather cool and underrated records that still sound pretty good when I spin them today. That especially goes for "A Thousand Deaths" (2002), which is probably the one that I have listened to the most. Anyway, I was looking forward to checking this 4-track EP simply titled "Umbra" out and I must confess that I found it quite stimulating and cool to listen to. It clocks in at 22 minutes and therefore serves as both a stopgap before the next full-length album and an experimental piece of work that fits in nicely with the dark metal territory (or perhaps melodic and experimental death metal territory, if you will?) that the band seems to occupy these days. The death/thrash metal days are not entirely gone though as you can still detect a lot of riffs and parts that hearken back to the "early" days, but as I am sitting here and listening to these four songs on a cold and windy December night, they certainly do the trick in terms of establishing a dark and ominous atmosphere. The use of a choir is superbly done and adds a rather unsettling and sinister "The Omen"-like feeling to the opening track, "Requiem". An epic and varied tune for sure. The somewhat fast-paced and yet unpredictable "Decline" is aggressive and in-your-face while the moody and utterly melancholic "Tremor" fits in perfectly in the overall perspective and serves as a contrast to the other hard-hitting and punchy songs that the EP is comprised of. The songs cover a lot of ground in that everything from the grandiose to the beautiful and further on to the bleak and claustrophobic is covered.

The production is both organic and sharp, and the musicianship is excellent, but that should come as no surprise. These guys have been at it for a long time. "Umbra" is a solid and cleverly written EP that I will definitely keep coming back to. It possesses a dramatic vibe and a strangely majestic sound that I find very appealing, and while the music is complex and twisted at times, it is a consistently memorable experience throughout. Simply put, "Umbra" is a little gem that is neither to be overlooked nor underestimated.