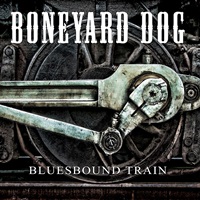 Boneyard Dog is an Irish classic rock band with a strong bluesy/70’s template based on this record. Forming in 2015 and the brainchild of singer Rob Mancini and guitarist Davy Kerrigan, the lineup also contains drummer Ron Wikso, infamous Rainbow keyboardist Tony Carey, and numerous guests on bass, backing vocals, and harmonica. The sound this group of musicians produce contains a laid back, bluesy rock foundation – in league with Whitesnake, Black Country Communion and guitarists like Johnny Lang or Eric Clapton.

At times, you feel like you are heading out to the wild west through the acoustic/electric intertwining and Rob’s measured melodies – check out "Hundred Guns" where some of the drumming salvos reach into "Slow An’ Easy" familiarity. A sultry swing aspect creeps along with harmonica flurries for "Mother Lode", Tony using his keyboard skills to smooth out the hooks and crevices. Boneyard Dog aren’t the fanciest band- the prefer to lock into a solid set of notes and build upon them to set up the blues-based addictive energy. Davy delights in tasteful lead breaks that mesmerize through small build-ups – the trailing section of "Paid My Dues" one of the highlights of the record. The follow up "Lay Down the Law" actually has more of an Eddie Money-type breathy vocal and a solid 4/4 drum tempo backing up the proceedings, hopefully one that makes the live set lists should Boneyard Dog perform frequently.

Rockers to ballads, "Bluesbound Train" contains 12 tracks that embody the spirit and pride of classic rock, developing new material to champion and get behind. When veteran bands retire and stop recording new albums, hopefully Boneyard Dog will be one of the bands that continues to hold the torch for the movement – and gain proper respect/ support from the marketplace.