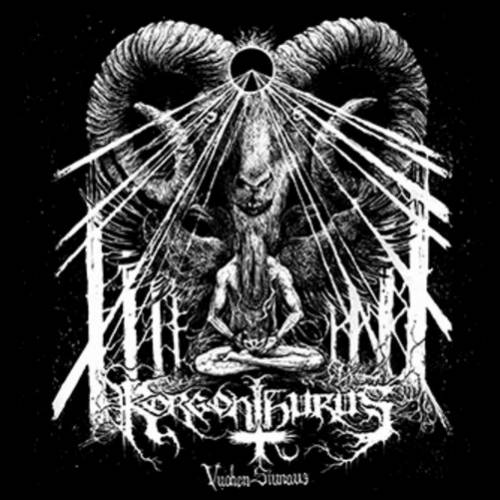 The Finnish black horde known as Korgonthurus, which was spawned in the year 2000, has been rather consistent and active over the years in terms of recording and releasing music and so on. Quite a few demos, EPs, split releases, and compilations by the band are floating around in the underground these days, but this 2016 assault entitled "Vuohen Siunaus" is only the second full-length album so far in their sickening career.

Musically, Korgonthurus embodies many of the traits that I associate with Finnish black metal, which is to say cold and sinister riffs, melancholic atmospheres, melodies that reek of despondency, torturous and tortured vocals that evoke hate and chaos, and a raw and inhuman production. There is nothing original or innovative about that at all, but while Korgonthurus may possess a rather traditional black metal sound, the moods conjured up by the band as well as those unsettling vibes that creep into certain songs are both repulsive and appealing, which, obviously, is a cool thing. "Kaaos" has a cynical and aggressive feel to it that immediately leaves you in a bad mood, which is great. I also dig the varied vocals that haunt this song. "Puhdistuksen Tulet" is another memorable tune while "I.K.P.N." is a great slab of tormented and depraved black metal. To be perfectly honest with you, the first few times that I spun "Vuohen Siunaus" it sounded somewhat bland and mediocre, but gradually I was won over by the variety and depressing aura of tunes like "Ihmisyyden Raunioills" and the three tracks that I mentioned earlier on. The band has a firm grasp of how to write and compose wicked mid-tempo parts that reek of despair and desperation. The music is neither complex nor hard to digest as such, but some of the melodies and riffs and so on definitely had to grow on me, so keep that in mind if you decide to give this a spin.

Some of the layers and textures of the songs are quite effective, which is to say that it works quite well when these guys weave different riffs and melodies together and go for a broader and fuller sound. Having layered guitars also adds more substance and color to the whole affair, but there are times when it all just seems to go nowhere, namely that last 15-minute track entitled "L.U.X.", which adds nothing to the album at all and just drags on forever. Similarly, "Inho" does not move me either. In that sense, "Vuohen Siunaus" is a slightly uneven affair that loses its momentum in places. The quality of the vocals also vary a bit; they slay in "Kaaos" but sound utterly repetitive and non-dynamic in "Inho". However, the positive aspects of the album do outweigh the negative ones, and the strength of the first three songs on the album as well as "Ihmisyyden raunioills" leaves me feeling positive about this sucker. A decent and entertaining albeit uneven album for all you lovers of caustic and morose black metal!