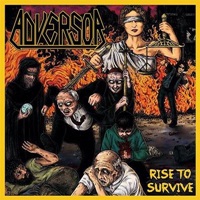 An Italian thrash band formed by brothers Dado (vocals/guitar) and Jacopo (drums) Cardi, Adversor comes on the heels of the break up for H.O.S. who were together for 9 years and released one album "The Beginning" on the same label. "Rise to Survive" sees the four-piece (rounded out with guitarist Aurora Merci and bassist Emanuele Alimonti) traverse Teutonic meets latter day Bay Area pastures – where the vocals are very rapid fire and raspy, the riffing equally intense, and the bass play rising up to the progressive challenge.

Kreator, Sodom, and Sadus would probably be the three biggest reference points – Dado certainly has that Mille-like rising scream and rhythmic word spew down pat, while Emanuele often takes the bass solo lead (check out "Beware of Soothsayer" for his Sadus/Flotsam & Jetsam-like low charge). A lot of times the gang background vocal salvos go hand in hand to intensify the speed and power of the music – check out "Abhor War Crimes" that have this S.O.D.-oriented manic reaction as if rallying in protest to the content covered. Not everything Adversor spits out is off to autobahn racing speeds – the intro riff for "Final Call" as well as "Envenomed" solid in mid-tempo, headbanging passages that could stir up solid pits.

At nine songs and 33 minutes, "Rise to Survive" gets the job done in a reasonable way, not overstaying any welcome and leaving the listener ready for another go around. The acoustic moments sprinkled around for closer "Event Horizon" can be an area further explored on future Adversor recordings. Will "Rise to Survive" be the be all and end all thrash record of the year? Probably not – but it’s definitely energetic and entertaining, and that’s what most people desire out of this genre.