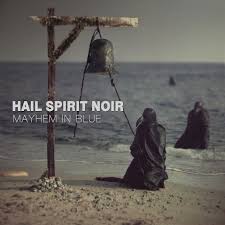 Mayhem in Blue is the third album from Greek prog black metallers Hail Spirit Noir, and their first for Dark Essence Records. For those who have not heard this act before, expect a fairly even but schitzophrenic split between occult psychedelic rock and a kind of Mortuary Drape meets Greek BM sound. While you may have heard the disparate elements before, it is doubtful whether you have heard anyone combine them in quite the same way as HSN.

I have been a fan of this act ever since their debut Pneuma. I love the jazzy, clean feel of the guitar at times and the addition of instruments such as flute, varied percussion items and Wurlitzer style keyboards. Also the fact that when the darker, harder passages kick in, they have the ability to actually cause harm (in line with the bands stated aims). The interesting thing about HSN is that they are equally comfortable with all aspects of the genres they are mashing (ie. They are not a BM band that have added a few flutey solos in the hope of sounding interesting or the reverse – a prog act that has added the odd blast section). Having said all that, I have given each record successively lower scores. HSN have been completely bonkers right from day one, but as they travel further and further their output has become less and less accessible. It becomes more and more challenging for the listener to find something to hold on to as they are whisked through the kaleidoscope that comprises each track. The problem is that the individual stages of each song too often sound disconnected, which has a negative effect on the narrative journey and dynamics of each. Yes, there are tons of sparkling passages, but the base matrix in which they are housed is too Promethean.