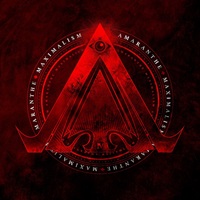 Now superstars of the modern melodic/cyber metal scene, Swedish/Danish act Amaranthe know that the need to push the parameters of their style is imperative. If you stay stuck in a particular box churning out the familiar hooks, interest may wane and people could move on to other bands. "Maximalism" as the fourth album sees the sextet taking more chances – going commercial for some songs while being a little heavier in others, but for the most part still delivering those beautiful vocal melodies and catchy musical parts that will deliver more hits than misses.

If you desire aggressiveness, "Fury" should ring true to the melodic thrash/death heads, even with Elise singing more of the poppy chorus, because Henrik Wilhelmsson Englund screams his face off in unison to the down-tuned riffing out of mastermind Olof Mörck. The softer side tickle your fancy? Closing ballad "Endlessly" should be another winter to check out, Elize breathtaking as the keyboard-oriented arrangement gives the lyrics an added sense of wonder and cinematic splendor. The cyber/electronic dance oriented keyboard elements of course come up a lot, right out of the gate for "Maximize" and "Faster" especially – but the most risk-taking track is "That Song" – featuring a main hook straight out of the Shania Twain/ Rhianna commercial school rather than something metal-oriented.

Instead of having all three singers in every song, there’s a little more separation into a particular singer’s comfort zone. Jake E taking control on "Break Down & Cry", while when they decide to come together on "Fireball", the tradeoffs elevate the energy to another level. Guilty pleasure for some, Amaranthe seemingly came from nowhere at the beginning of the decade and made a permanent impression on the marketplace because of the cross-pollination of styles within their music. For people that are looking at the future of modern melodic metal, there’s no better start than looking at this band’s impressive discography.