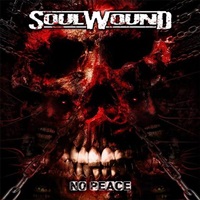 Finnish band Soulwound already have one favorable aspect going for them: keying in on a Fear Factory song for their name. "No Peace" is the quintet’s second album, stylistically fusing modern thrash metal with industrial, cyber, and groove elements – and it’s quite an explosive roar churning forth on all facets. For comparison’s sake, imagine the rhythmic guitar / drum propulsion that put Sepultura on the map with "Beneath the Remains" and "Arise", along with parts of Machine Head, Fear Factory and Slayer and that gives you a clue into Soulwound sonically.

Relentless guitar riffing, up-tempo double kick action, and caustic vocals make "Alone Against All", "Misery Index" and the other cuts savage and true to the origins of the movement – commercialism far from the mindset. The intro "Impulsive Aggression" contains a cyber-oriented female narrative over this echoing mid-tempo guitar refrain – setting up the action to come. These musicians understand the need for melodic components – the beginning musical passage to "Hurt Me Plenty" one to treasure in its Slayer/Testament-like glory, while vocalist Arto Jauho occasionally hits those raspy Anselmo-oriented screams to keep things modern beyond his normal gruff, growly delivery. "Altars of Skin" hits all the adrenaline buttons even on a mid-tempo scale, the jackhammer precision picking and melodic nuances as well as occasional bass spotlights from Joni Järvenmäki sure to make ears bleed and bodies melt.

Soulwound aren’t reinventing the wheel – they just prefer to keep things rolling along in an aggressive manner, and that’s alright. Getting to the heart of thrash metal while also adding in smart, melodic and modern facets keeps the album churning along without disruption or sameness, which can plague other artists. "No Peace" gives listeners forty minutes of raw, relentless, riveting thrash – entertaining the legions who love this genre.