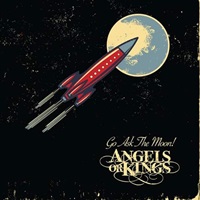 Making up for lost time since reforming in 2011 from their first incarnation in the late 80’s, Angels or Kings from the UK return for their second full-length in "Go Ask the Moon". An 11-song outing, these musicians sit in a melodic AOR/rock comfort zone, the bluesy vocals having a Foreigner meets FM vibe, while the guitar playing and keyboards as well as main hooks crisscross similar domestic meets big USA arena rock lines.

Remember when keyboards had this shimmering brightness, melding seamlessly with the vocal melodies on hand? That’s what you get with "When the Heart is Wrong", taking the pop skills of Richard Marx and intertwining a mid-tempo West Coast feel that has Journey at the core. Vocalist Baz Jackson has an interesting delivery and tone – at times a little gritty a la Joe Elliott, other times as smooth as Lou Gramm during his Foreigner prime, as "No More Faith to Lose" and harder rocking "Waiting for the Thunder" illustrate. Sound effects like the steam and chugging make "Heartbreak Railroad Company" an old school piano ballad, the background vocals a throwback to Billy Joel and The Eagles, while the main musical hook would make the track an easy top 10 hit in the 80’s marketplace.

You don’t often get a second chance in the music industry to make permanent impressions – Angels or Kings are making the most of the opportunities in front of them, and as such have distinctive qualities that should capture a wide birth of rock and AOR fans. "Go Ask the Moon" has enough vibrancy and solid songwriting to go places, and keeps listener interest high for the future of the group.